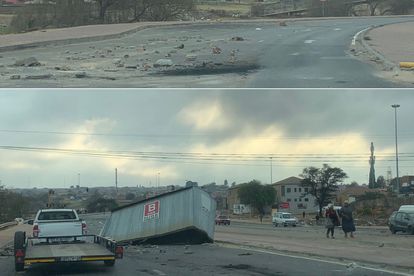 Mayor of Ekurhuleni Tania Campbell has drawn comparisons between the Tembisa protests and the 2021 July unrest in KwaZulu-Natal and Gauteng.

Mayor says the protests were ‘orchestrated’

Campbell believes that the protests, that have so far claimed four lives, were orchestrated. Earlier this week, Tembisa residents took to the streets to protest against poor service delivery, among other things.

Residents barricaded roads, burnt tyres and even set a few cars on fire. While speaking on 702fm, Campbell said that external forces had overtaken the genuine protests over service delivery.

“There are external forces taking advantage of the situation. The same situation we saw in July last year when criminality took over real issues communities wanted to address. I will be in conversation with the provincial police commissioner and the premier on a resolution going forward,”

Last year, over 350 people died during the riots in KZN and Gauteng which caused billions of rands in damage.

Previously, it was reported that Ekhuruleni mayor Tania Campbell has dubbed the Tembisa protests as a well-orchestrated operation to make the township ungovernable.

Residents have been demonstrating over the high utility rates and electricity bills. The protests quickly turned violent and at least two people were killed. One of them is reportedly killed allegedly at the hands of the Ekurhuleni Metro Police Department (EMPD).

The community accuses the mayor of not wanting to engage with them. Campbell said as a multi-party coalition government, visuals from Tembisa no longer seem to be related to community-based issues. Read the full story here.

Tembisa residents left powerless due to burned substation and Eskom

While it remained calm in Tembisa on Tuesday afternoon, the area is without power due to the burning of a substation.

In addition, Eskom has also suspended power supply in the area until protests come to an end. Residents are dealing with the aftermath of the protests, as the City of Ekurhuleni tries to clean up the area.

Municipal cars were still on fire on Tuesday morning, but the area is now without power. This despite the protests was sparked by high utility rates and electricity bills. Read the full story here.