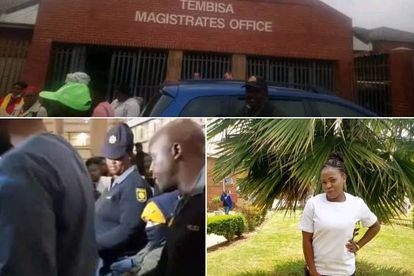 The bail hearing for the Tembisa nurse alleged shooter was successful after he was granted bail.

On Wednesday, 20 July, the police officer accused of murdering his ex-lover at Tembisa Hospital was granted bail after he appeared in the Tembisa Magistrates’ Court.

WHO IS THE TEMBISA NURSE SHOOTER?

Known as Constable Lucky Mudau, the accused was granted a bail of R5000 by the court.

The Tembisa nurse alleged killer is a quadriplegic and confined to a wheelchair after turning the gun on himself.

He attempted to take his own life after allegedly shooting Lebo Monene, an assistant nurse at the hospital.

The incident happened on 9 February at the hospital premises.

THE FUNERAL OF THE LATE NURSE

The slain nurse was laid to rest on 19 February while his alleged shooter fought for his life under police guard in hospital.

The court case was supported by a number of civil movements and the family of the deceased.

The hope was for Mudau to be denied bail.

The nursing union Democratic Nursing Organisation of South Africa (DONESA) wanted the police officer to face the full might of the law.

ALSO READ: Police officer accused of shooting nurse in Tembisa back in court

Earlier, spokesperson for DONESA Sibongiseni Delihlazo said they call on law enforcement agencies to ensure that, if he recovers, the police officer faces the full might of the law for the killing of the nurse and for abusing the privilege that is extended to officers of the law to enter healthcare facilities with their guns.

Lebo’s father Nicholas Monene was unhappy with the decision taken by the court saying the consideration of Mudau’s health would favour him during the trial.

The accused Tembisa nurse shooter is expected to return to court on 21 September.