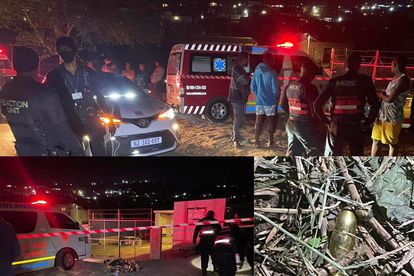 A teenager was mercilessly killed for his cellphone. Photo RUSA

A teenager was mercilessly killed for his cellphone. Photo RUSA

A 19-year-old male was shot and killed before being robbed of his cellphone in Egodeni near Hazelmere in KwaZulu-Natal on Tuesday evening.

SHOT AND KILLED FOR A CELLPHONE

According to Reaction Unit South Africa (RUSA) spokesperson, Prem Balram, they received multiple calls from residents from about 18:59 reporting the shooting.

The shooting approximately happened 4 kilometres from the Hazelmere Dam.

“On arrival, reaction officers found the male lying in a prone position on a driveway leading to a shisanyama store. Upon examination, he was found to have sustained a single gunshot wound to his lower back which resulted in his demise,”

He added that according to three of the deceased’s friends, they decided to purchase meat from a local shisanyama store.

They entered the premises while the deceased remained on the road, having a telephonic conversation with his girlfriend.

“Two males approached him from the rear and shot him without warning. The deceased ran towards the store screaming for assistance before he collapsed on the driveway,”

Furthermore, the suspects approached the deceased’s lifeless body and stole his Huawei cellphone before they fled on foot in an unknown direction.

Balram added that a 9mm bullet and a spent cartridge were recovered at the scene.

Moreover, a female on scene informed reaction officers that she was also robbed of her cellphone by two suspects minutes prior to the murder, said Balram.

Meanwhile, on Sunday, an 18-year-old male who was accused of stealing a cellphone in Nkangala, Inanda KwaZulu-Natal was found dead.

The teenager’s body was discovered on an unpaved pathway after a search party was launched by the family.

Balram said they received a call for assistance at 09:27 after the teenager’s family located his body during a search.

“On arrival, RUSA Medics examined the teenager and discovered that he had sustained blunt force trauma to his body,”

He further added that according to his family, three of the deceased’s friends arrived at their residence in eMzinyathi this morning at approximately 09:00 and queried if the teenager returned last night.

Balram added that the friends informed his family that they were assaulted by members of the community after they were accused of stealing a cellphone.