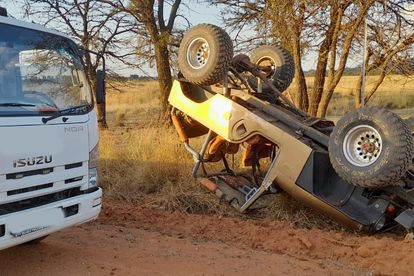 A teenage boy was killed in an accident where a Jeep rolled over in Rustenburg. PHOTO: ER24

A teenage boy was killed in an accident where a Jeep rolled over in Rustenburg. PHOTO: ER24

A teenager boy died in an accident when a Jeep rolled over on a dirt road outside Rustenburg on Saturday afternoon.

The 15-year-old boy lost his life on the Maanhaarand dirt road. A man believed to be in his late 30s suffered minor injuries, ER24 said.

ER24 paramedics arrived at the scene at around 17:35. Family members of the deceased boy were already at the scene.

“Attempts were made to resuscitate the boy using Advanced Life Support interventions, unfortunately, these were unsuccessful.”

The boy was then declared dead at the scene. The other patient, in his 30s, was treated and transported to hospital for care of his minor injuries.

The scene was handed over to the South African Police Services.

ANOTHER KILLED IN RUSTENBURG ROLLOVER

A man in his early 40s also lost his life when his vehicle rolled over, also in Rustenburg.

The incident happened on Helen Joseph Drive in the early hours of Sunday morning, Campbell said.

A woman in her 30s was also in the vehicle and suffered critical injuries.

“ER24 paramedics were on the scene at 01:20 along with the Fire Department and Trauma Rescue. The two people were found entrapped in the VW Polo, which was upright after having rolled.”

When paramedics attended to the man, they found that he showed no signs of life. He was declared dead as soon as ER24 arrived.

“With the help from other teams, ER24 extricated the two within 30 minutes. Advanced Life Support interventions were needed to stablise the critically injured woman, before transporting her to hospital for further care.”

On Saturday afternoon, four men aged in their 30s and 40s lost control of a one-ton truck. The truck rolled over onto its side along the N4 highway between Rustenburg and Swartruggens, said ER24.

Paramedics arrived at the scene at around 16:16.

“The men were all outside the vehicle by the time. The one patient, who had been travelling on the back of the truck, was lying on the ground. He was in a slightly more serious condition,” said Campbell.

The men were all treated at the scene before being taken to hospital.