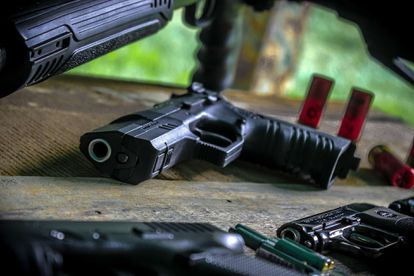 Police may have made an important breakthrough in the struggle to curb ongoing – and currently increasing – taxi violence around the country.

Three men, identified as ‘most wanted’ suspects, have been arrested on the East Rand and linked to a number of cases of taxi violence, including several murders.

Trio were spotted and arrested

Police spokesperson Captain Mavela Masondo said officers received information that the suspects might be in Benoni and set up a surveillance operation.

At around 11:30am the trio were spotted travelling in a Nissan SUV and intercepted and arrested.

They were then taken to a flat in the town and, upon searching the premises, police found two rifles, seven magazines and large quantity of ammunition of different high calibre firearms.

AK47 found at another location

The main suspect then led officers to a location in Windmill Park in Vosloorus, near Boksburg, where an AK47 rifle loaded with ammunition was also recovered.

The firearms will be taken for ballistic tests to determine if they have been used in the commission of crimes.

According to a news report by EWN, another taxi violence suspect was also arrested in Cleveland in Johannesburg on Friday.

The media outlet said the four were also alleged to have links to cash-in-transit heists across Johannesburg.

This came only days after two additional operators died in shootings in the Pretoria CBD and in nearby Atteridgeville.