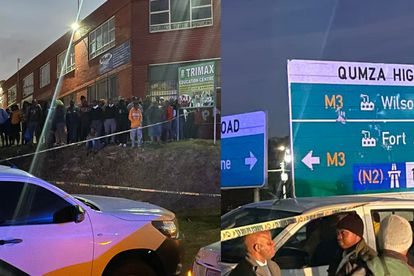 At least four people have been killed following a taxi-related shooting in East London, Eastern Cape.

BYSTANDER AMONG KILLED IN TAXI-RELATED SHOOTING

The department indicated that the Transport and Community Safety MEC, Weziwe Tikana-Gxotiwe was at the scene of the taxi-related shooting incident in Mdantsane.

According to the department, the four dead are two taxi leaders, a suspected assassin and a bystander.

The South African Police Service (SAPS) is yet to release an official statement on the matter.

Taxi-related violence seems to be prevalent in the Eastern Cape.

ALSO RELATED: Mass shootings in South Africa: how to stop the cycle of reprisals

In another taxi-related shooting, last month taxi drivers in Gqeberha were missed by bullets after three gunmen opened fire at them at Peddie Taxi Rand on 27 July.

According to the report, the Border Alliance Taxi association held an executive meeting at the taxi rank when three male suspects arrived carrying firearms and started firing shots. It is alleged that members in the meeting returned fire and during the exchange of gunshots, one of the assailants was injured.

Police in the area were alerted to the incident and Police spokesperson Brigadier Tembinkosi Kinana said upon receiving the information, members swiftly proceeded to the scene, where upon arrival, the suspects were pursued and subsequently arrested near the truck-in at Gqeberha.

MORE SUSPECTS HUNTED BY THE POLICE

“During the investigation, the detectives were informed about the remaining suspects’ hideout at Kenton On Sea.
The information was operationalized leading to the arrest of the four remaining suspects aged between 28 and 44 at various residences at Ekuphumleni and Ndokwenza Townships and Kenton On Sea respectively.”

He said management further praised the members for their bravery and patriotism that averted major bloodshed and saved the lives of about 18 people.