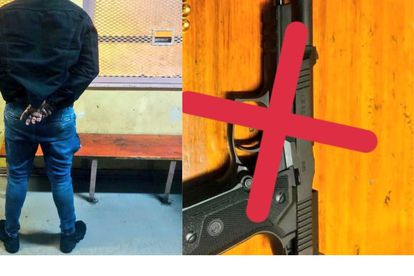 A taxi operator was nabbed with an unlicensed firearm in Midrand, north of Johannesburg.

TAXI OPERATOR ARRESTED FOR POSSESION OF AN UNLICENSED GUN

“One male suspect was arrested by the Johannesburg Metropolitan Police Department (JMPD) K9 Unit and SAPS Highway Patrol in possession of an unlicensed firearm in Kaalfontein, Midrand,” Fihla explained.

WHEN WAS THE TAXI MAN APPREHENDED

He said on Wednesday, 24 August 2022, officers received information about suspects who have unlicensed firearms.

“The operational team was assembled and they proceeded to Molebatsi Street in Kaalfontein, Midrand, where they were informed that the wanted suspect is a taxi operator driving a white Toyota minibus,” Fihla detailed.

Upon arrival at the said location, the suspect’s vehicle was spotted and approached.

“The officers searched the vehicle and the occupants inside the vehicle.”

When searched, the male driver was found to be in possession of an unlicensed pistol with the serial numbers filed off.

Fihla added that the suspect was arrested and detained at Ivory Park Police Station.

ANOTHER SUSPECT NABBED FOR DISCHARGING A FIREARM IN PUBLIC

In a related incident, JMPD IIOC Undercover officers arrested a male suspect for discharging a firearm in an urban area on 23 August.

ALSO READ: Crazy! WATCH as man falls out of moving taxi while officers look on

Whilst on patrol officers heard gunshots. They proceeded to the location where the gunshots came from at Kwa-Mai Mai Traditional Market.
The suspect was identified with the firearm in hand and was apprehended.