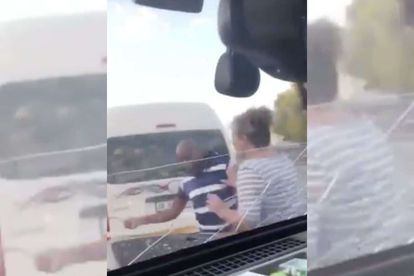 In a video posted to Twitter by Yusuf Abramjee on Monday 9 March, a man, believed to be a taxi driver, can be seen viciously smashing another motorist’s windshield.

Thereafter, he proceeds to kick and hit the front bumper of the vehicle. All while the motorist is screaming, trying to prevent the taxi driver from damaging her vehicle.

It is unclear why the incident broke out in the first place. However, the man doesn’t seem to be angry with the female motorist herself.

Here’s what can be seen in the video

In a video that is just 12 seconds long, a man can be seen with an object that appears to be a golf club and which he smashes into a female motorist’s windshield. One can hear the lady’s screams in the background.

It looks as though he is walking away, but then returns to knock the front bumper with the golf club. The woman screams, “No, no!”, and pushes him away. He then walks back to his taxi and the video ends.

The caption of the video says the taxi driver was arrested but it couldn’t have been shortly after the incident, as the man is wearing different clothes in the images that were taken.

This points to the fact that the man could have been arrested at a later stage after police perhaps had to track the taxi down.

The woman in the video surely had enough time to take down the number plate of the taxi as it was parked right in front of her vehicle.

Here’s how you should respond to road rage

According to carinsurance.arrivealive.co.za, this is how you can avoid situations involving aggressive drivers: