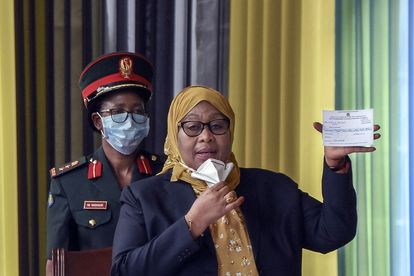 Tanzania’s President Samia Suluhu Hassan shows a vaccination certificate after she received a shot of the Johnson & Johnson vaccine from a health worker at the State House in Dar es Salaam, on July 28, 2021, during a mass vaccination campaign against the Covid-19. Tanzania kicked off its Covid-19 vaccination drive on July 28, one of the last countries in the world to start inoculating its people against the disease.
STRINGER / AFP

Tanzania’s President Samia Suluhu Hassan shows a vaccination certificate after she received a shot of the Johnson & Johnson vaccine from a health worker at the State House in Dar es Salaam, on July 28, 2021, during a mass vaccination campaign against the Covid-19. Tanzania kicked off its Covid-19 vaccination drive on July 28, one of the last countries in the world to start inoculating its people against the disease.
STRINGER / AFP

When Samia Suluhu Hassan took up the reins of power in Tanzania four months ago, there was hope at home and abroad she would turn the page on the increasingly autocratic rule of her late predecessor.

But with the arrest of a high-profile opposition leader on terrorism charges, critics are now openly brandishing the term “dictator” to describe Tanzania’s first woman president.

Hassan, a stalwart in the ruling Chama Cha Mapinduzi party who served as vice president throughout John Magufuli’s rule, was sworn in as head of state following his sudden death in March.

He was initially popular for his no-nonsense anti-graft stance and won praise for investing in infrastructure, expanding free education and clawing back taxes from foreign mining companies.

But his rule was marred by a slide into authoritarianism which saw him crack down on the media, activists and free speech.

In the weeks after her swearing-in, the soft-spoken Hassan reached out to the political opposition, vowing to defend democracy and basic freedoms, and reopening banned media outlets.

She quickly reshuffled the cabinet, appointing her own allies in many key positions but without alienating Magufuli’s grassroots support base, analysts noted.

In her most striking move yet, she broke with the policies of the deeply COVID-sceptic Magufuli who had mocked efforts by other countries to contain the disease and instead told Tanzanians to turn to prayer to confront the coronavirus “devil”.

Last week, Hassan received a COVID jab live on television as she launched a mass vaccination drive for the 58 million-strong population.

But activists and opposition politicians say Hassan is continuing “Bulldozer” Magufuli’s path in stifling dissent in a country once seen as a haven of stability in East Africa.

“Hassan uses a very good tone even when she is talking of the same things as those of her predecessor. Her kind of personality is making things look different,” said Abel Kinyondo, a lecturer at the University of Dar es Salaam.

Hope for an end to Magufuli’s ‘war on democracy’

Police last month arrested members of the main opposition party Chadema, including its leader Freeman Mbowe, in a nighttime raid just hours before they were to hold a public forum to demand constitutional reform.

Mbowe has since been charged with terrorism financing and conspiracy and is being held behind bars in Dar es Salaam.

The arrests have triggered outrage in opposition circles, and alarm among rights groups and Western nations.

“There was hope that Magufuli’s reign of terror and war on democracy would end,” Tundu Lissu, who was Chadema’s candidate in the 2020 election, said on Twitter.

But the arrests have “dashed any such hope”, said Lissu, who went into exile in Belgium after an attempt on his life in 2017.

Chadema has called for non-violent protests on Thursday when Mbowe’s case is due back in court.

Despite Hassan’s promises, political rallies are still not allowed, and she told editors last month that the opposition should postpone such events to focus on building the economy.

“There are ongoing positive reforms (but) more issues are pending,” he said.

“Whatever she is promising now cannot be guaranteed unless we have legal mechanisms such as the constitution to defend it.”

Hasan is ‘taking a different route’

Independent analyst Kennedy Mmari noted that Hassan had moved quickly to strengthen ties with the international community and neighbouring countries.

She visited Kenya to repair relations after years of disputes over trade and border issues, and she sought a rapprochement with Tanzania’s semi-autonomous region of Zanzibar.

Under her leadership, Tanzania has also begun talks with the International Monetary Fund for a $571 million aid package to revive the economy after the damage inflicted by COVID-19.

“She is taking a different route but we will need more time to get the real direction,” Mmari said.

“We are looking to see exceptional policies like getting the new constitution and change the political environment which currently looks like a single-party system,” he said.

On the streets of Dar es Salaam however, people were more worried about putting food on the table.

“I’m yet to feel her impact,” said Cecilia John, a fruit vendor in the city’s Buguruni district.

“She is increasing freedom and happiness but I need money to get daily bread.”