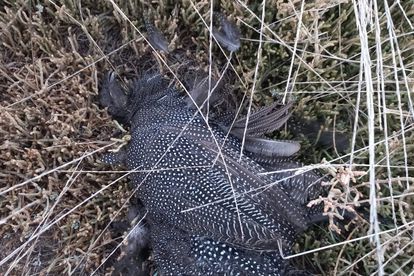 One of the dead guinea fowls.
Photo: Cape of Good Hope SPCA.

One of the dead guinea fowls.
Photo: Cape of Good Hope SPCA.

Firefighters were able to contain a raging fire under Blaauwberg Road bridge in Table View on Wednesday, 16 February 2022.

Cape of Good Hope SPCA Inspectors were called in to assist displaced and injured animals along with 70 firefighters.

“Fortunately no houses were damaged. Property owners were advised to take their animal companions for veterinary checks immediately should they show signs of distress from possible smoke inhalation.

“A beehive contained in a storm water outlet survived. The bees appeared unharmed. A bee expert advised not to move the hive. The bees will drench themselves in honey and move on of their own accord if needed.”

Several guinea fowl who succumbed due to smoke inhalation were amongst some of the casualties found.

The cause of the fire is still unknown.

The SPCA also urged Milnerton residents to look out for any displaced wildlife or animals in distress.

NSRI spokesperson, spokesperson Craig Lambinon said the horses were scattered in groups across a number of smaller islands that they had sought shelter on. This caused the rescue mission to take hours to complete.

“As islands were flooded the horses were forced to swim to the next island, causing the horses to be scattered over a large area, some already standing on islands that had submerged,” he said.

Lambinon said during an intense operation the horses were corralled and walked through chest-deep water and at places swum through the water to reach larger islands.