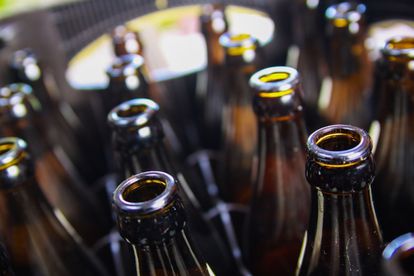 Police detectives have launched a manhunt for a 30-year-old suspect who allegedly assaulted a 62-year-old woman before stealing 12 full bottles of beer from her residence in Cookhouse, Eastern Cape on 11 August 2021 at about 15:00.

According to the police, the woman also knows who the suspect is.

WOMAN WAKES UP TO THE SOUND OF GLASS BOTTLES

It is alleged that the woman caught the suspect in her house when she woke up by the sound of glass bottles being moved around.

While investigating the noise in her residence, the woman found the suspect stealing full bottles of beer. She tried to stop him, but as the suspect fled from the house, he pushed the elderly woman, causing her to fall and fracture her left leg.

“The elderly complainant was able to call her neighbours for help and was then taken to Andries Vosloo hospital, Somerset East. The 30-year-old suspect is known to the complainant,” said Captain Bradley Rawlinson.

A case of house robbery was opened for further investigation and police are urging anyone with information that could lead to the arrest of the suspects to contact Detective Captain M Mvelase on 082-442-3218 or on 042-247-1177. The information may also be shared anonymously via Crime Stop at 08600 10111, and all information will be treated strictly confidential.

In a separate incident, the High Court of South Africa, Eastern Cape Division, found Duwayne Krige, 27, from Gqeberha guilty of kidnapping and murdering his ex-girlfriend’s two-year-old son on Wednesday. This is after Krige pleaded guilty to the charges.

Krige confessed that he wanted to commit suicide after losing his job and he added that he also decided to kill the boy, Juliano Gallant, before doing so as he believed that the boy’s life would be dire after his suicide. It was revealed in court that Gallant was not Krige’s biological son, however, Krige believed that he was.

Gallant lived with his maternal grandmother at Barcelona in Gqeberha. On 5 August 2019, Krige visited the boy and as the grandmother stepped into the kitchen area, he ran away with Gallant.

“Krige took Gallant to a bushy area and assaulted the boy to death. He then tried to hang himself on a tree but became afraid and removed the rope from his neck,” said National Prosecuting Authority (NPA) Regional spokesperson in the Eastern Cape, Anelisa Ngcakani.

“Krige then decided to take the boy to Livingstone Hospital. On his way there he approached a few strangers, showed them Gallant’s body and asked them whether they thought he was alive or dead. When he arrived at the hospital Krige told the staff that the boy fell from a bunk bed. He then left Gallant there. The boy was certified dead later,” added Ngcakani.

The post-mortem results reveal that Gallant died due to blunt force trauma to the head and body. The case returns to court on Thursday to arrange a date for sentencing.