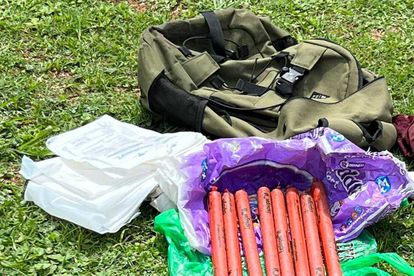 A 23-year-old will appear in court after he was found with a bag full of explosives. Image: Hawks.

A 23-year-old will appear in court after he was found with a bag full of explosives. Image: Hawks.

A 23-year-old man is expected to appear at the Durban Magistrates Court after he was intercepted with commercial explosives.

The suspect was arrested on Tuesday, 22 November by members from the Directorate for Priority Crime Investigation (Hawks) Durban Serious Organised Crime Investigation and eThekwini District Task Team for contravention of Explosives Act which happened on the M41 highway near Umhlanga in Durban.

Hawks spokesperson, Captain Simphiwe Mhlongo said members received information about a suspect who was in possession of commercial explosives.

It is alleged that the suspect was in a minibus taxi that was travelling to Durban. The said taxi was intercepted on the M41 and the suspect tried to escape but he was arrested. Commercial explosives were found in his bag.

“The Explosives Unit and Local Criminal Record Centre were summoned to process the crime scene as well as to secure the exhibits. The arrested suspect is expected to appear in the Durban Magistrate’s Court on Thursday, 24 November 2022,” Mhlongo said.

In another recent incident, two foreign nationals were arrested after they were allegedly found in possession of explosives along the N1 road in Limpopo. The two were arrested by members of the Beitbridge Task Team during a stop and search operation.

According to Limpopo police, members of the Beitbridge Task Team were busy along the N1 road between Musina and Beitbridge, conducting a stop and search operation when they stopped a suspicious blue Toyota Corolla sedan with two occupants.

“The suspects were immediately apprehended on the spot and the explosives as well as the  motor vehicle confiscated,” he said.