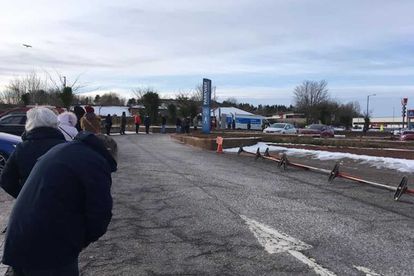 Queues for the surge testing site at Coulby Newham after the South African covid variant was discovered in Middlesbrough.Image: Teesside Live

Queues for the surge testing site at Coulby Newham after the South African covid variant was discovered in Middlesbrough.Image: Teesside Live

Middlesbrough health authorities in North-West England have ordered extra coronavirus testing following the detection of a case of the South African variant.

The mutant coronavirus strain — which has now been spotted more than 200 times across the UK — was identified as part of random sequencing by Public Health England, with the case linked to the Marton and Coulby Newham areas.

On Friday, surge Covid testing was rolled out in Staffordshire in the West Midlands of England after another case of the SA variant was detected in a resident with no links to international travel.

Dr. Nic Coetzee, consultant in communicable disease control for Public Health England Midlands, said: “With new variants emerging all the time and spreading more rapidly, it is not surprising that a case of the South African variant has been found in Staffordshire.”

About 200 cases of the SA variant have been reported across the UK.

In December, when the strain emerged in SA, health minister Zweli Mkhize fired a stinging rebuke at UK Health Secretary Matt Hancock, after the British politician claimed that the variant was ‘spreading quicker than other strains’ in the UK.

has taken exception to this suggestion, issuing a stern rebuke on Thursday.

Esther Mireku, consultant in public health in Middlesbrough, said: ‘I urge everyone over the age of 16 in the Marton and Coulby Newham areas to come forward for a test.

“This will help us understand more about the potential spread of this new variant.”

“The high prevalence of Covid in the town, combined with the reporting of this variant, are a reminder to everyone of the importance of staying at home as much as possible and following hands-face-space when out for an essential reason,” she said.

Local mayor Andy Preston said: “What’s really important now is that we establish whether the variant has spread further around Middlesbrough.”

There are now six variants of coronavirus being investigated by Public Health England, mailonline reported, five of which have already been found in the UK.

Surge testing has been deployed in a number of areas across the country in attempts to get on top of new variants of the disease.

Another mutation – dubbed the ‘Kent variant’ – was first found in the South-east of England in September, with scientists confirming it is much more transmissible than the original covid-19 strain which spread last spring.

There have been more than 59,000 cases of that variant tracked by the Government.

The World Health Organisation (WHO) has recommended the Oxford/AstraZeneca jab even for use against South African strain.

The South African variant of coronavirus, known as 501Y.V2 or B.1.351, has mutations on its outer spike proteins that change the shape of the virus in a way that makes it look different to the body than older versions of the virus.

Because the immune system’s antibodies are so specific, any change in the part of the virus that they attach to – in this case the spikes – can affect how well they can do so.

Current vaccines have been developed using versions of the virus from a year ago, which didn’t have the mutations the South African variant, or other strains does, so scientists are concerned the immunity they create won’t be good enough to stop it.

Vaccines and the variant

Oxford/AstraZeneca (Approved; Being used in the UK)

Research published in February claimed that the Oxford/AstraZeneca vaccine appears to have a ‘minimal effect’ against the South African variant.

A study of 2,000 people by Wits and Oxford Universities found that two doses of the jab may only offer 10-20% protection against mild or moderate Covid-19.

Oxford and AstraZeneca said they are already working on a booster jab targeted at the South African variant and that it will be ready by autumn.

Pfizer/BioNTech (Approved; Being used in the UK)

Two studies suggest that Pfizer and BioNTech’s vaccine will protect against the South African variant, although its ability to neutralise the virus is lower.

One by Pfizer itself and the University of Texas found that the mutations had ‘small effects’ on its efficacy. In a lab study on the blood of 20 vaccine recipients, they found a reduction in the numbers of working antibodies to tackle the variant, but it was still enough to destroy the virus, they said.

Another study by New York University made the same finding on 10 blood samples from people who had the jab. That team said there was a ‘partial resistance’ from the variant and that a booster should be made, but that it would still be more effective than past infection with another variant.

Pfizer is developing an updated version of its jab to tackle the variant.

Moderna said its vaccine ‘retains neutralizing activity’ in the face of the South African variant.

In a release in January, the company said it had tested the jab on the blood of eight people who had received it and found that antibody levels were significantly lower when it was exposed to the South Africa variant, but it still worked.

Moderna is working on a booster jab to tackle the South African variant.

Janssen, a subsidiary of Johnson & Johnson, has trialed its vaccine in South Africa and found it prevented 57% of Covid cases.

These differences are likely in part due to the variants in circulation.