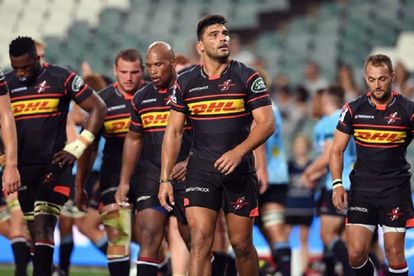 South Africa’s Stormers react after a try by the Australia’s Waratahs during their Super rugby union match in Sydney on February 24, 2018. / AFP PHOTO / WILLIAM WEST / — IMAGE RESTRICTED TO EDITORIAL USE – STRICTLY NO COMMERCIAL USE —

South Africa’s Stormers react after a try by the Australia’s Waratahs during their Super rugby union match in Sydney on February 24, 2018. / AFP PHOTO / WILLIAM WEST / — IMAGE RESTRICTED TO EDITORIAL USE – STRICTLY NO COMMERCIAL USE —

The Crusaders made a blistering start with four early tries, finishing on 45-28 and leaving the Stormers still chasing their first-ever victory in Christchurch.

The eight-time champions ran in seven tries to four to maintain their imposing home record against South African teams.

Winger George Bridge again proved the Stormers’ tormentor, scoring two tries to add to the hat-trick he notched the last time the teams met in Christchurch.

The huge buffer built in the first half meant the Crusaders were never threatened, although captain Sam Whitelock praised the Stormers for battling on and scoring four tries.

“We started off pretty well but full credit to them, they came back and tested us,” he said.

Earlier, the Melbourne Rebels launched a second-half blitz to down Japan’s Sunwolves 37-17 in Tokyo, with winger Jack Maddocks scoring a hat-trick.

The scores were locked 10-10 at half time before the Rebels pulled away to win the first two matches of the Super Rugby season for the first time in their history.

The Stormers started badly by turning over a lineout ball in the first minute and their night deteriorated as they conceded four tries in the first 20 minutes.

Bridge opened the floodgates, scoring in the corner after the Crusaders worked the ball down the blindside following a Stormers’ scrum infringement.

The South Africans struggled at the set piece and their attacks faltered through poor handling or loose passes when their backline managed to go on the offensive.

Their persistence paid off when prop JC van Rensburg crossed for a converted try in the 33rd minute after the Stormers worked the ball through 15 phases.

But the Crusaders hit back through Bridge, who capitalised on a defensive mix-up to make it 31-7 at half-time.

The Stormers remained positive and prop Wilco Louw barged his way over for a converted try a minute after the restart.

They ground out another converted try in the 54th minute, this time going through 20 phases before JD Schickerling scored to narrow the gap to 31-21.

Any hopes of an unlikely comeback were dashed when Seta Tamanivalu and Richie Mo’unga took the Crusaders’ try tally to seven, although Steven Kitshoff managed a late consolation try for the Stormers.