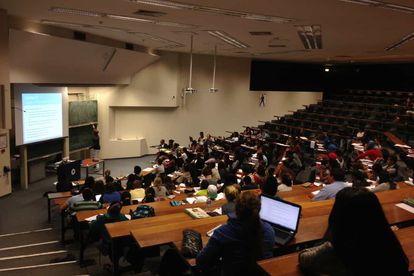 A lecture in progress in Leslie Social Science building in theatre 2A at the University of Cape Town. Photo: Discott / Wikimedia Commons

A lecture in progress in Leslie Social Science building in theatre 2A at the University of Cape Town. Photo: Discott / Wikimedia Commons

National Student Financial Aid Scheme (NSFAS) administrator Randall Carolissen told members of Parliament the embattled entity had improved to the point where it was able to handle double the number of applicants in the space of a year.

Carolissen submitted figures to the portfolio committee on higher education showing that NSFAS approved financial aid for 442 380 students at universities and colleges in 2019, out of a total of 546 499 applications.

He said thanks to the improved efficacy of the system since it was placed under administration, 93% of applications were finalised by the end of January, in time for the academic registration process.

This relieved beneficiaries of having to pay registration fees.

Carolissen said the number of applicants grew thanks to a comprehensive social media campaign, simplifying the online application process and stabilising the technical platforms at the fund.

He told MPs that one of the first problems the administrators sought to rectify after the scheme was placed under administration in August 2018, was that it seriously lacked technical experts but was top-heavy with highly paid executives.

The staff then set to work tracing beneficiaries of funding, because in many cases they didn’t know who to pay because data systems had been severely compromised.

This required a massive investment in cleaning up data and achieving systems stability, he said, resulting in the establishment of a war room that has since made good progress in resolving the data crisis.

Nearly the entire budget has been used

As a result, NSFAS has now disbursed more than R21 billion of the R22 billion that was budgeted for 2018.

NSFAS was placed under administration by then higher education minister Naledi Pandor after its failure to pay out bursaries to nearly half the approved beneficiaries led to student protests.