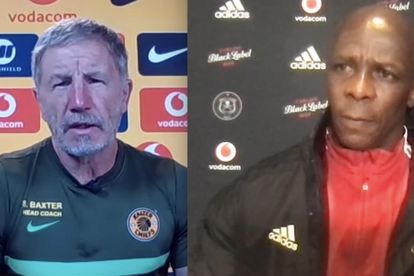 Kaizer Chiefs coach Stuart Baxter and Orlando Pirates co-coach Mandla Ncikazi had the SAME message from supporters ahead of the Soweto derby on Saturday, 6 November.

According to iDiskiTimes, both coaches insist that form goes out the window when these two sides clash.

“It doesn’t affect the derby at all. I think this result, win, lose or a draw, the derby, has its own life. That’s my experience of the derbies,” Baxter told reporters,” Baxter expressed.

Chiefs come off the back of a home loss to in-form Stellenbosch FC. Despite this, Baxter that Amakhosi will be a different side in the derby.

READ | IT’S 1-1 BEFORE THE SOWETO DERBY KICKS OFF!

Mandla Ncikazi knows all too well how these two sides bring out the best in one another. Pirates a 2-1 victory over Sekhukhune United on Tuesday evening.

“I’m happy that we’ve won today, but in the derby, in such matches there is no form,” Ncikazi said.

“But like I said, this match, there is no form, there is no history, it will depend on what happens on the day of the match,” expressed Ncikazi.

READ | MAJOR PART LEADERS DIVIDED OVER SUPPORT AS ANC, DA AND EFF LEADERS WEIGH IN ON THE SOWETO DERBY

For Amakhosi and Buccaneers fans, one thing is clear – form goes out the window and all that matters now is Saturday’s, Soweto Derby!