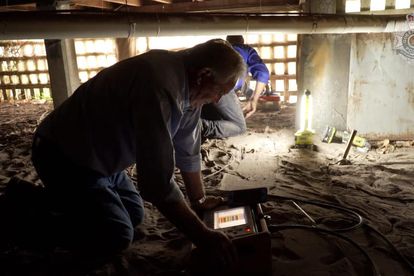 A police officer using ground-penetrating radar to search for evidence of the body beneath the house. Photo credit: Queensland Police Service

A police officer using ground-penetrating radar to search for evidence of the body beneath the house. Photo credit: Queensland Police Service

Police in the Australian city of Brisbane are continuing to search the home and surrounding property of a 76-year-old woman for evidence that she may have murdered her young son 50 years ago.

The woman, a mother of 11 children, was arrested this week after an unnamed person came forward with information that that the child, who was aged three or four at the time, disappeared sometime between 1968 and 1970.

Queensland state police believe that Maureen Enright, 76, and possibly her late husband Michael, may have murdered Peter John Enright, who was autistic, and then buried his body somewhere on the property.

Peter, though, was never reported missing and many of his siblings were apparently never aware of his existence, apart from vague rumours.

All of the children and Mrs Enright have now been questioned, with Detective Inspector Damien Hansen of the Queensland Police Homicide Group telling the media that Mrs Enright had given “various versions” of what happened.

Police have appealed to anyone who may have lived near the family, or have known them, in the 1960s and 70s to please come forward with any information they may have.

Any piece of info may help

“Any piece of information, no matter how small, can have a significant impact on our investigation,” Hansen said.

“Any death of a child is tragedy for all [who] are involved; Peter was just an innocent child. We are investigating all aspects of his life and care, including family dynamics.”

Forensic officers, including bone experts, are continuing to search in and around the home and are utilising ground-penetration radar in an effort to locate the child’s remains. However, given the timeframe and acidity of the soil, police say it’s possible that nothing will be found.