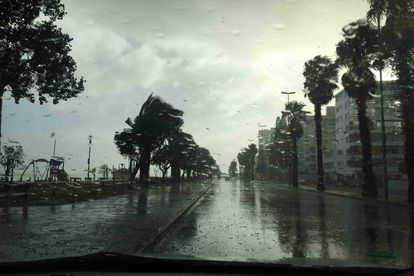 The intense storm resulted in 15 people being displaced in Imizamo Yethu, Hout Bay.

The Huguenot tunnel and the N2 near Perigreen in Grabouw was also closed for traffic due to the storm.

In a statement, provincial local government spokesperson James-Brent Styan said no reports of deaths or serious injuries had been received.

“Some evacuations have been made and a handful of injured citizens taken to hospital by Emergency Services. The injuries was caused by roof collapses,” Styan said.

The City of Cape Town said flooding occurred in informal settlements across the city.

Meanwhile, Metrorail services between Kraaifontein and Bellville have been cancelled. Commuters should expect delays of up to an hour on all other lines, Metrorail said on Twitter.

No major delays on roads across Cape Town were reported.

Styan said up to 45mm of rainfall has been recorded in Grabouw over the past 24 hours.

Ocean swells of up to 13 metres are expected in certain areas which might cause damage to low-lying areas close to the ocean.

“The public is cautioned to stay away from Western Cape beaches throughout the day,” Styan said.