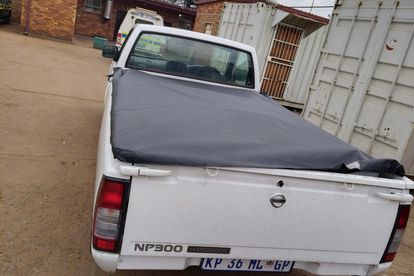 Police found the van strange as it seemed it was carrying something heavy. PHOTO: SAPS

Police found the van strange as it seemed it was carrying something heavy. PHOTO: SAPS

A suspicious van was stopped and searched but it turns out it is a stolen police van that has been converted into a diesel tanker.

Police from Delmas were conducting patrols on the N12 in Mpumalanga when they noticed the suspicious Nissan NP300 single cab bakkie. Inside were two occupants, said police spokesperson Brigadier Selvy Mohlala.

The van, which had Gauteng registration number plates, looked awkwardly strange. It appeared to be loaded with something heavy and was covered with a black canvas.

The driver was ordered to stop for a search, Mohlala said.

“Surprisingly, when members removed the canvas, they discovered that the back of the [van] was in actual sense, converted into a diesel tank.”

The two men, aged 29 and 34, were questioned. It was found they are Zimbabwean nationals.

ALSO READ: 81-year-old among seven charged with fraud and corruption

As police questioned them about the purchase of the diesel, the pair failed to produce proof, said Mohlala.

Instead, police confiscated 500 litres of diesel, valued at an estimated R13 800.

“To make it worse, the members of police uncovered that the registration number plates displayed in the bakkie were incorrect, hence the car was seized.”

But it was then discovered that the van with the diesel is in fact a car belonging to the South African Police Service in Thohoyandou in Limpopo.

“This matter is still being investigated to find out as to how the vehicle landed in the hands of the two Zimbabwean nationals.”

The two are detained and face charges of possession of suspected stolen diesel. The 29-year-old was found to not have any legal documents to be in the country. He faces an additional charge of contravention of the Immigration Act, said Mohlala.

“More charges against the two are eminent and police cannot rule out the possibility of more arrests as the probe continues.”

“We have been saying all along that the calibre of the South African Police Service (SAPS) members that we have in the province are capable and skilled to do the work in an exceptional way, hence the commendable results. We are thankful for the SAPS vehicle that was recovered and we are also adamant that there will be more clarity with regard to the police car” said Manamela.