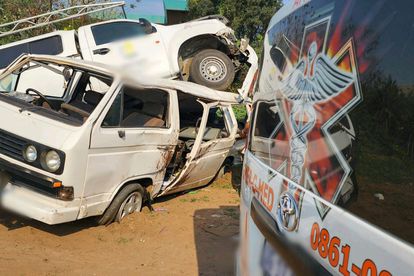 When asked, Kyle placed on record that no fatalities were reported.

WHEN WAS THE ACCIDENT REPORTED

The accident took place before 3pm yesterday involving a minibus taxi and a delivery van.

“Emer-G-Med paramedics responded to the scene of a collision involving a light delivery vehicle and a minibus taxi on the N2 south near the old Durban Airport just before 3pm on Friday,” he said.

“Reports from the scene are that as many as twelve school children sustained injuries ranging from minor to moderate whilst one adult suffered moderate injuries.”

He added that the injured were treated and stabilised on the scene before being taken to various nearby hospitals for further medical care.

WHY THIS ACCIDENT UPDATE WAS CRUCIAL

The need for an update follows the deadly crash on the opposition end of the N2 where more than 20 people, including learners were killed yesterday.

This horrific accident happened on the N2 near Pongola when a truck ploughed into an oncoming bakkie which was ferrying school children.

According to the latest reports, the driver of the truck has handed himself over to the police and is set to appear in the Pongola Magistrate’s Court on Monday, 19 September.

MORE ON THIS: Pongola: Truck driver in accident that killed 21 people hands himself over

The KwaZulu-Natal Department of Education MEC Honourable Mbali Frazer has sent her heartfelt condolences to the families, friends and community of the learners who tragically lost their lives during this terrifying encounter.