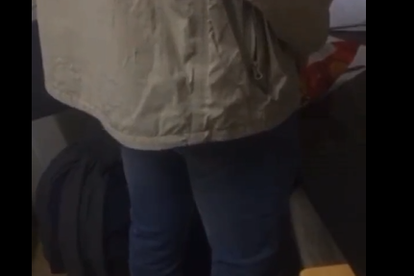 A video of a white Stellies student urinating on a black student’s room at a residence circulating on social media.
Photo: Screenshot.

A video of a white Stellies student urinating on a black student’s room at a residence circulating on social media.
Photo: Screenshot.

Stellenbosch University in the Western Cape has come under fire after a video of a white student urinating on a black student’s room at a residence was circulated on social media.

The incident reportedly happened on Sunday, 15 May 2022 around 04:00 at Huise Maria residence while the black first year student was sleeping.

Social media users have regarded as a racially motivated act. Stellenbosch University has come under fire for similar incidents in previous years.

In the video the black student can be heard asking the one peeing why he is doing so…”This is what we do to black students,” he reportedly said.

According to the individual who shared the video, there was no altercation or anything done to provoke the white student into doing such. However, questions have also been raised as to why the door wasn’t locked and where the other room mates were (if he has any).

In previous years, black students at Stellenbosch shared their accounts of racism in the institution because they either speak a different language (other than Afrikaans) or simply because of their skin colour.

“Stellenbosch represents everything that is wrong with our country. We have seen their women’s day catalog and we let it slid. It is one institution adamantly concerned with preserving white supremacy.” @AbutiMoshikwa tweeted.

In August 2015 Luister was released. It is a documentary distributed via social media which shows how students are allegedly still exposed to the dehumanising experiences of racism and other forms of discrimination. It is a series of interviews with students who talk about their personal accounts of race-based discrimination and even violence at Stellenbosch University.