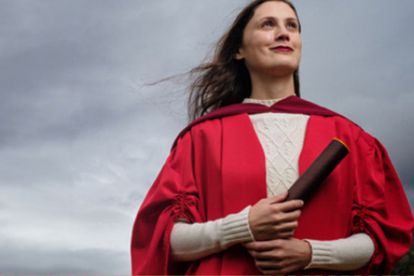 While other teenagers celebrated youthful milestones like young love or the stress to pass exams, Amy Martin faced it all on top of enduring a myriad of brain tumours. Now, with only 75% of her brain, she earned her doctorate from Stellenbosch University on Wednesday.

With the determination of a Spartan and the poise of Athena, the Greek Goddess of wisdom, Martin secured her doctorate in Ancient Cultures at Stellenbosch University. She focused on the notion of a female poetic tradition in ancient Greek literature.

She was diagnosed with life-threatening brain tumours at the age of 14, 17, and 18. The numerous surgeries came at the cost of losing 25% of her brain after multiple operations to remove the tumours. Martin currently has four titanium plates in her skull, along with 16 titanium screws.

The tumours also caused severe epilepsy and muscular damage that took her years to overcome.

Martin was bullied and felt ostracised throughout high school because of her shaven head which exposed her scars and her severe epilepsy.

“I was constantly afraid of the next seizure. They were extremely painful. In the beginning, I kept wondering every time I potentially did something silly whether it was just me or if whether it was because of my brain tumour and the fact that 25% of my brain was missing.,” she said.

Martin said with time she learned that all her struggles, from the surgeries, tumours and seizures, shaped and forged her into the stout-hearted heroine of her own story.

After matriculating Martin decided to study languages and cultures at Stellenbosch University.

After obtaining her first degree, she went to South Korea to teach English for two years. Upon her return, she completed her honours and Master’s degrees in Ancient Cultures.

NEW PERSPECTIVE ON LIFE AND DEATH

Martin says being diagnosed with brain tumours at such a lynchpin era of her life was a herculean task, both physically and emotionally.
“I definitely struggled in the beginning. When I woke up from my operations in the intensive care unit, I couldn’t move my left arm. The doctors told me there was a very big possibility that I would never really regain the full movement on the left side of my body. So, I went for physiotherapy. While in ICU, I watched people of all ages die. That gave me a new perspective on life and death. So, I just kept strong and reminded myself that I was still capable of doing whatever I set my mind to,”