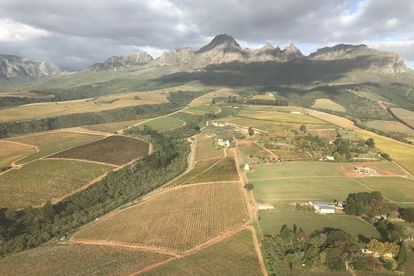 On Saturday, owners of Louiesenhof Wines were granted an interdict by the Western Cape High Court to remove unoccupied structures and to prevent any additional people from setting up on a piece of vacant land owned by the estate. The occupation on Watergang started last week.

Situated on the outskirts of the Stellenbosch, the land belongs to a family trust which includes Watergang Farm, Louiesenhof Small Holding and the Watergang Cellar.

According to the landowner’s attorney, Ernest van Staden, over 100 structures had been erected on the privately owned land.

Sunday saw the removal of the empty structures and unused materials.

“Police acted in execution of the court interdict which limited the Sheriff to only removing material of people not yet residing on the property, but had intended to erect a structure on the property.”

Local traffic officials were stationed at an intersection to intercept and prevent vehicles carrying building materials to Watergang.

Law enforcement agencies, including the Public Order Police, were present to monitor the situation and to prevent further occupation.

The interdict was not the first, but the second that the owner had to obtain in order to prevent unauthorised settlement.

In May, to prevent unlawful settlements on municipality-owned land, the municipality had to obtain interdicts.

“The farmer had an interdict against the invaders somewhere in April/May and they moved out. This is a second attempt,” said Van Wyk.

Municipal Manager, Geraldine Mettler, spoke to News24. A possible sale of Watergang is currently being negotiated between the owner and the municipality.

Stellenbosch has been trying to move residents of Kayamandi, in blocks, to a Temporary Relocation Area (TRA) in order to carry out improvements to utilities and services in the area. Due to the possible exposure to electrical wires and other safety hazards, temporary relocation of residents was a must.

The plan is that they would move back, and the next block of residents would move to the TRA until the entire suburb’s utilities had been upgraded.

Unfortunately, attempted occupations of municipal and privately-owned land saw unrest in Kayamandi started in May. Damages were done to the TRA structures and contractors, in fear of their own safety, refused to go on site until things had calmed down.

In order to enable contractors to restart the TRA project, Mettler shared that the municipality is in community consultations to guarantee safe working conditions.

“We would like to finish as [soon as] possible with the TRA,” said Mettler.

Residents voiced their fears in May; during a March to the town hall. They believe that if they agreed to relocate to the TRA, they would be unable to return to their permanent homes.

The residents also felt that instead of spending money on the TRA, the municipality should have bought them land to build on.

About 22,000 people are on the Stellenbosch municipality’s housing waiting list.