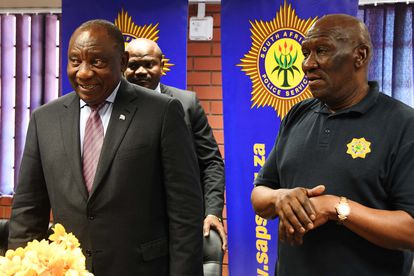 Democratic Alliance (DA) leader John Steenhuisen asked President Cyril Ramaphosa what it would take for him to fire the Minister of Police, Bheki Cele, in a parliamentary question. Steenhuisen prefaced this question with the police ministry’s catering and accommodation expenditure and the state of crime in South Africa.

Steenhuisen said the South African Police Service (SAPS) have spent R600 million in each year since Bheki Cele became the Minister of Police on 26 February 2018. This works out to an average of R1.4 million per day.

The leader of the opposition put forward that during this same period, the police’s frontline members, including personnel, detectives and reservists have been reduced. All this while citizens of South Africa are being “raped and murdered.”

“…what conditions need to pertain before he will consider replacing the Minister of Police with someone who is able to provide the leadership that the Republic’s police service so desperately requires, if this approach to allocating scarce public resources and the current crime levels do not constitute sufficient reason?” asked Steenhuisen.

In his reply, Ramaphosa said the expenditure on catering and accommodation during the period was incurred in the fulfilment of the police’s constitutional and statutory responsibilities. However, he skirted the question about which “conditions” would prompt him to dismiss the Minister.

The President said catering and accommodation is a normal part of the cost of running a police service.

He listed instances where officials would need to be accommodated away from their usual place of work due to operational and deployment requirements. Recent examples include “public order interventions in various provinces, securing the national and local government elections, deployments in response to COVID-19, and deployments to police the July 2021 unrest,” said the president.

“There is no reason to replace a Minister on the basis of expenditure that forms part of the operational requirements of a police service,” Ramaphosa concluded.

MINISTRY SAYS DA COMPLAINTS ARE NOT ‘BASED ON FACTS’

The DA has long been calling for Cele’s head. On Tuesday, 6 September, hundreds of protestors marched to his office in Tshwane and demanded his removal.

The police ministry’s spokesperson hit back at the march and said the “DA’s claims are not based on facts.”

Themba said the money the party is referring to is going towards fighting crime. She added that the breakdown of the parliamentary budget provided by the ministry shows that the police ministry receives the smallest share of the overall SAPS budget.

“So it is not true that the ministry, let alone the minister, spends this much money on catering. This claim by the DA can only be deduced as an attempt to score points and the party should rather use the energy to work with the ministry and SAPS to find ways to keep communities safer,” said Themba to the Cape Times.