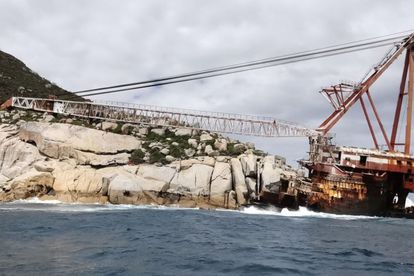 The BOS 400 shipwreck near Cape Town in the Western Cape has become somewhat of a tourist attraction, with several online hiking guides, encouraging eager visitors to hit the trails surrounding the 27-year-old wreckage. Some visitors take it too far and climb aboard the crane barge and even jump into the sea from it. The National Sea Rescue Institute (NSRI) has had to remind the public of the risks involved several times over the years; the latest incident took place on 22 August.

The NSRI Bakoven and NSRI Hout Bay duty crews were activated after being alerted to reports of injured people at the BOS 400 crane barge shipwreck on Sunday, 22 August, at approximately 12:15.

Both duty crews duty sea rescue crafts from training exercises and on arrival at the wreck they saw a group of people on the shore on the rocks above the wreck, according to the NSRI.

An NSRI rescue swimmer was sent into the water and he swam ashore and discovered that a pair of university students – aged 21 and 23 – were hurt after they reportedly jumped off the crane of the BOS 400 wreck.

“They were in the care of their fellow hikers including a student nurse, first aiders and an off-duty NSRI Witsand crewman. Both patients were treated for serious injuries, including lacerations, abrasions and hypothermia,” said the NSRI.

The injured students were brought to the NSRI Hout Bay sea rescue base where they were assessed by paramedics before being taken to hospital by a private vehicle for further medical treatment. They were later discharged.

The NSRI determined that a group of hikers made up mostly of young students planned a trip to the area that was supposed to include a swim at Sandy Bay. When the group arrived at the BOS 400 wreck, however, it apparently became evident that some of the hikers prearranged to clamber aboard and jump off the wreck.

“According to reports it was immediately evident to the group of hikers that the 2 young men were in trouble after they landed in the water and an NSRI Pink Rescue Buoy, stationed2 on the rocks above Maori Bay, was thrown to the 2 young men who used the buoy for floatation,” said NSRI.

The group was filled with people with some sort of knowledge on how to deal with the situation at hand. There were apparently an NSRI volunteer, two qualified first aiders and a student nurse in the group that helped the two injured students until rescue services arrived.

The NSRI appealed to the public not to climb aboard and not to jump off the BOS 400 wreck because it is at an advanced stage of deterioration and the rusted steel could collapse at any time. The parts of the wreck that have already fallen off the barge are submerged in the surrounding water. It’s an unsafe environment no matter which way you look at it.

The French barge was being towed from the Republic of Congo to Cape Town when its tow rope broke on 26 June 1994. It ran aground just off Duiker Point in the Western Cape and has remained there ever since.