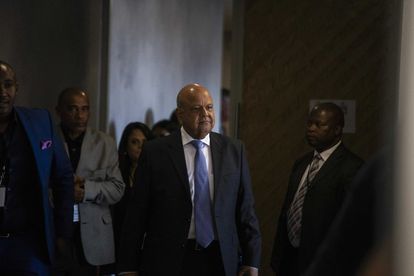 Pravin Gordhan, South African Minister of public Enterprise, returns after a lunch break at the hearings of the Judicial Commission of Inquiry into Allegations of State Capture, Corruption and Fraud in the Public Sector including Organs of State on November 19, 2018 in Johannesburg.
Wikus de Wet / AFP

Pravin Gordhan, South African Minister of public Enterprise, returns after a lunch break at the hearings of the Judicial Commission of Inquiry into Allegations of State Capture, Corruption and Fraud in the Public Sector including Organs of State on November 19, 2018 in Johannesburg.
Wikus de Wet / AFP

The commission was concluding its work for the day, having heard hours of SARS-related testimony, including more of the strained relationship between Gordhan and the former commissioner Tom Moyane. Mpofu, representing Moyane, had been cross-examining Gordhan, which was a continuation of their last sitting back in November 2020.

Referring to allegations of racism that had been levelled against Gordhan by Moyane, le Roux asked Gordhan to give commission chair, Deputy Chief Justice Raymond Zondo, background on his credentials as an African National Congress (ANC) struggle veteran. She also asked Gordhan how it felt to be called racist, in light of his political history, however Zondo said the minister’s weigh-in wouldn’t be necessary as he had already defended himself against the racism allegations earlier.

Mpofu then objected after Gordhan asked to make a brief comment. Le Roux then interrupted Mpofu, which he did not take too kindly to.

“Chair, I’m on the floor. Really, I can’t stand this kind of behaviour. This cannot be happening for the third time. Miss le Roux must shut up when I am speaking”

His comment drew reaction from Gordhan and some who were in the room. Mpofu then said, “You too Mr Gordhan…you also shut up.”

DCJ Raymond Zondo was then quick to remind Mpofu that he was the one in charge. The chairperson then gave le Roux an opportunity to explain and again, Mpofu objected, saying he was still speaking. Zondo then asked him to sit down and let le Roux finish explaining.

“Chair, then maybe we must just leave because if we are not going to speak and allow interruptions…,” Mpofu said.

“You are going to speak,”Zondo assured him before giving le Roux the floor to speak.

Le Roux was still not backing down on her request for Pravin Gordhan to explain how it felt to be labelled a racist but again, Zondo said this was not necessary.

“That doesn’t clarify anything Miss le Roux, the purpose of reexamination under the regulations of the commission is to clarify,” he said.