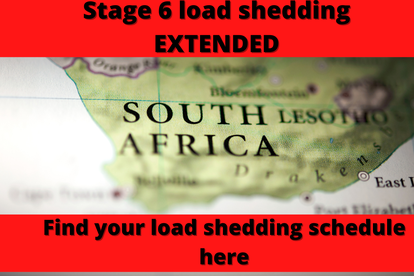 Eskom has just EXTENDED stage 6 load shedding at least until Friday, 1 July 2022. Are you still looking for your schedule? – we have it all right here.

ESKOM: ‘THE STAGE OF LOAD SHEDDING MAY HAVE TO CHANGE’

Eskom said that due to strike action at its power stations, stage 6 load shedding will be implemented from 14:00 on Thursday until midnight. This will be followed by stage 4 from midnight until 05:00 on Friday.

“From 05:00 until 00:00 on Friday load shedding will be implemented at Stage 6. A minimum of Stage 4 will be required continuously over the weekend. Eskom continues to evaluate the situation and closely monitor the system. We will communicate and implement any changes as may be necessary,” said Eskom spokesperson Sikonathi Mantshantsha.

Eskom has further said that high levels of staff absenteeism and intimidation of working employees in some of the power stations is still rife, which makes it hard to conduct routine maintenance and other operational requirements, which will further impact the reliability of generation units.

“Due to the unlawful and unprotected strike, which has caused widespread disruption to Eskom’s power plants, Eskom is still unable to return some generators to service. Eskom is compelled to take this unprecedented step to conserve emergency generation capacity to safeguard the power system. There remains a risk that the stage of loadshedding may have to change at any time, depending on the state of the plant”

THE ONGOING STRIKE HAS LET TO ASSOCIATED LOSSES AND LABOUR ISSUES

Eskom earlier this week said the ongoing strike that has led to associated losses of an additional 3,651MW due to coal and labour issues.

“This is a place we do not wish to be. I prefer to run a utility. We are reaping the fruits of a number of decisions that were made, or not made previously, defects in plants, decisions taken by previous Eskom management, and right now with unlawful action.

“The solution is as quickly as possible, introduce new capacity. Eskom is not the only roleplayer here – others must be involved.”

Smartphone users can also download the app EskomSePush to receive push notifications when load shedding is implemented, as well as the times the area you are in will be off.

WHAT IS STAGE 6 LOAD SHEDDING?

What is Stage 6 load shedding:

Stage 6 load shedding means the grid will need to shed 6,000 MW of power to keep the national power grid from collapsing, which will leave the state-owned power utility starting additional, unscheduled power cuts wherever it needs to and outside of its schedules.

It also means your area could experience blackouts at any time, without warning. The same goes for stages seven and eight, with 7,000 MW and 8,000 MW of power needing to be saved, respectively.

Stage six doubles the frequency of stage three – which means you could be affected 18 times for four days for up to four-and-a-half hours at a time, or 18 times over eight days for about two hours at a time.