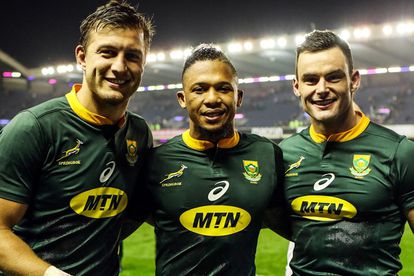 Jacques Nienaber and Rassie Erasmus had no choice but to say goodbye to one of their stars as he was sent home for an AFFAIR with the team dietician!

Elton Jantjies has been sent home with immediate effect after having an alleged affair with the Bok dietician, Zeenat Simjee.

The story broke moments ago, after Rapport broke the shocking news.

Jantjies was spotted entering Bok dietician, Simjees accommodation twice during the build-up to the Springboks opening Rugby Championship test match against the All Blacks in Nelspruit.

The Bok flyhalf has been sent home to deal with these allegations in order to avoid distractions in the Bok camps. Nienaber, Erasmus and the Bokke are focused on winning the Rugby Championship.

Further evidence emerged when a father and son who had booked into the same hotel. It was the son who recorded the two in the middle of passionate throes and then amidst a heated argument shortly after. This is the second incident in the space of a few months from Jantjies. He was arrested in May for a mid-flight incident.

This could heavily jeopardize his spot in Nienabers Rugby World Cup squad next year. Especially after his shocking display against Wales at Loftus in the Boks’ first match of the year. They cannot afford unnecessary distractions and drama at such a crucial stage in the competition. Their attention turns to Argentina in Buenos Aires on Saturday night. Where the Boks are targetting a bonus-point victory and clinical finishing to stay in the race to win this year’s tournament.

They trail log leaders New Zealand by just a point. Meaning, should Australia upset NZ and the Boks win in Argentina, they will enter the final week on top of the Rugby Championship standings.

What matters is what the Boks can control and that is winning and going for a crucial bonus point victory in both matches against Los Pumas.They can ill afford to be distracted with off field drama.