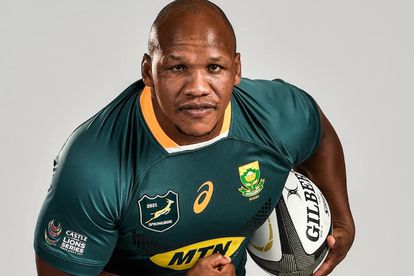 The Springbok player, Bongi Mbonambi, is said to have defaulted in paying maintenance of his estranged daughter. PHOTO: Facebook

The Springbok player, Bongi Mbonambi, is said to have defaulted in paying maintenance of his estranged daughter. PHOTO: Facebook

Springbok player Bongi Mbonambi has apparently been avoiding to pay maintenance of his estranged child, despite a positive paternity test and a court order.

Mbonambi, who is a hooker for the national team as well as the Sharks, has a 12-year-old daughter whom he has allegedly previously denied.

But a paternity test seen by The South African proved that Mbonambi, 31, is indeed the father of the child.

According to the child’s mother, Koketso Matlala, she was in a brief relationship with the rugby star back in 2010. They conceived a child who was born in the same year.

But Matlala says Mbonambi had initially requested her to terminate the baby, allegedly stating his mother, a nurse, would help.

Matlala said she found out about her pregnancy in March 2010. By then, she was already 11 weeks and seven days pregnant.

ALSO BREAK: Behind on Child maintenance? Courts may attach assets to force payment

“We didn’t say anything to each other the day we found out. I went to the doctor with him and we just didn’t talk about it. I then went home during the Easter weekend and my mother noticed I was pregnant. I gave her his number to talk to him. My mom asked him what he plans to do and he told her I am going to have an abortion on Tuesday. But we hadn’t agreed or spoken about it. He said his mother is a nurse and can help,” she told The South African.

The two eventually broke up when Matlala was six months pregnant, she said.

“He started avoiding me because he saw the abortion wasn’t happening.”

According to Matlala, she requested financial assistance from Mbonambi to maintain their daughter.

Mbonambi however requested a paternity test before making any payment to the child. In a letter from Mbonambi’s legal representative, dated 9 February 2016, his lawyer Kobus Pieterse told Matlala that the Springbok star will pay R1 540 directly to the child’s school.

“Our client likewise instructed us to convey that he will await the results of the blood test prior to accepting payment of the proposed increased amount… We will make the necessary enquiries and arrangements for the blood tests which will be done during April 2016 and we will be in contact with you in respect thereof,” said the letter seen by The South African.

Matlala states she was keen for the paternity test, but claims Mbonambi was constantly avoiding it.

She received yet another letter from a different lawyer, this time in June 2016. The letter, from Van Der Merwe Inc states that Mbonambi will schedule a date in due course for the paternity test.

But it was only three years later that the paternity test was done. A saddened Matlala recalls the day in March 2019, stating that Mbonambi did not bother looking at or greeting the child.

“When he did see our child, he didn’t even say hi to her or speak to her. I had her on my lap and she was crying in pain as they had to have blood drawn from her. He didn’t even look sideways at her.”

The paternity tests confirmed that Mbonambi was indeed the biological father.

From there, the court granted a maintenance order of R5 250, with the first payment to be made on 1 July 2019. The order also stated that the maintenance should increase yearly based on inflation rates.

But according to Matlala, she constantly has to remind the Springbok to make payments. In screenshots of texts, Mbonambi has seemingly been ignoring Matlala for the past months.

“He hasn’t paid maintenance. I constantly have to remind him. My child is 12-years-old now and this is so hard on her. She constantly watches rugby just to see her father. She even wants to play rugby and is the only girl in her soccer team at school because she thinks perhaps if she is into sports, he will accept her.”

Matlala has approached the courts to lodge a complaint in terms of Section 31 of the Maintenance Act.

When contacted by The South African, the Springbok hooker declined to comment.

“I am not going to respond until my lawyer hears about this,” he said before hanging up the call.

Meanwhile, Matlala approached the Springs Magistrate’s Court on Tuesday to file Section 31 and Section 26 complaints against Mbonambi. This process is to attach any of his assets to make up for the outstanding maintenance.

“This wouldn’t have been necessary if he just did what had to do for his child,” Matlala said.

Mbonambi, who joined the Sharks last year, is now married to Anastacia Mbonambi. The couple welcomed their daughter, Esa Khanyisile, in May 2019. Matlala, who is now engaged to be married, also had her second child in May 2019.

Generations: The Legacy teasers in December 2022

What’s happening in The River this December 2022?