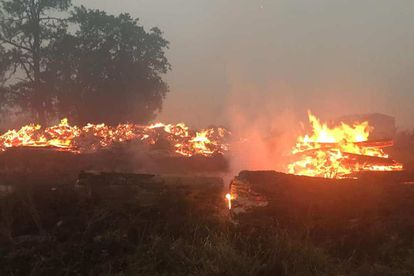 The South African news today wrap is a sombre affair on Tuesday, as we’ve got updates from the Garden Route fires and details of two memorials for HHP. Here’s what’s happening.

The death toll from the raging wildfires in George and Oudtshoorn has now reached eight people overnight. A baby and two other infants are among the fatalities, as is a pregnant mother. Rain is due to fall in the region on Tuesday.

The official memorial for Hip-Hop Panstula (HHP) gets underway today in Johannesburg, with another service planned in Mahikeng on Wednesday. The artist passed away last week, aged just 38.

The Oppenheimer family will face Parliamentary questions this afternoon, over their conflict with Malusi Gigaba and a “private terminal” debate. Fireblade Aviation, owned by the billionaires, saw Gigabyte back out of a deal to give them their own customs and immigration department at OR Tambo.

Meanwhile, there’s a meeting of the National Assembly today to discuss “The State of the Nation: What went wrong and what must be done to fix it”. They’ll probably need longer than just one standard Tuesday afternoon if they want to find all the answers.

It’s a big day in the Timothy Omotoso trial, as we have the peculiar situation of a judge having to consider his own recusal. The defence accuses Judge Mandela Makuala of accidentally showing bias towards state witness Cheryl Zondi, and want him off the case, or they’ll go to the Supreme Court of Appeal.

In a bid to slash R440 million a year at the beleaguered broadcaster, up to 981 jobs could be cut and over
1 000 freelancers would be affected. Their “section 189” restructuring would affect Group Services, Provincial Operations, Commercial Enterprises, News, Radio, Sport and Television. [Read more: Daily Maverick]

Dollar to rand value for 30 October

Struggling against a resurgent dollar, the rand is currently trading at R14.64 to the greenback.

Some volatile weather systems are operating across South Africa on Tuesday. Catch the updates here.

A lucky day in store? We’re rooting for ya! Check out your horoscope here.