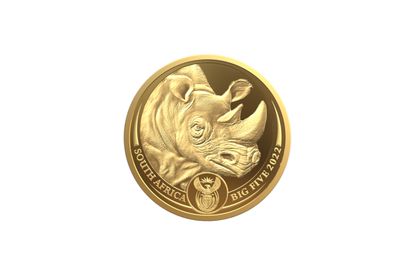 The South African Mint has released the third collectable coin in the Big Five II range, depicting a rhino on a coin with nominal value of R50.

The latest rhino coin follows the elephant and the lion coins released in late 2021 and early 2022, respectively.

The release of leopard and buffalo coins will follow in due course.

However, despite a face value of R50, you will pay nearly R100 000 for that coin when bundled with a more traditional Krugerrand.

The popularity of the first series led to the current series being released in 2021, with a subtle design change on the obverse of the coin.

In this series, the obverse of the rhino coin depicts the head facing the right-hand side. In the first series, the coin showed the full animal facing to the left.

According to the South African Mint’s website, the reverse design on the rhino coin range in series II remains the same as that of series I. The unique construct of two halves of the animal’s face reveals the complete portrait of a rhino only when two coins are placed side by side and an entire pride when multiple coins are placed next to each other.

In terms of cost, prices are reserved for seven (7) days due to potential fluctuations in the price of the various precious metals used for the coins.