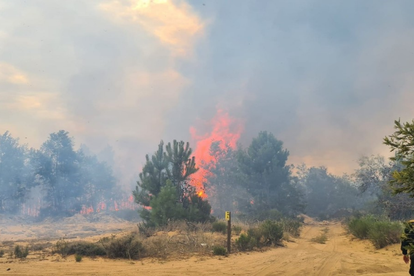 The fire had been contained, but reignited due to high temperatures. Image: Drakenstein Farm Watch

The fire had been contained, but reignited due to high temperatures. Image: Drakenstein Farm Watch

The fire which broke out at Mitchell’s Pass has once again ignited and is currently burning out of control according to local authorities.

The Cape Winelands district municipality says that a stop-and-go system has been put into place in a bid to help control traffic amid the crisis.

This comes after the fire started on Sunday evening, starting on the Witels River side of the pass and quickly spreading. The flames jumped the road and ignited the area nearby.

Firefighters managed to contain the situation by late on Sunday evening but conditions saw it reigniting on Monday.

High temperatures in the region, exceeding 40°C, have made continued flare-ups more likely to occur according to the municipality. Emergency personnel have requested aerial assistance after the blaze reignited. Furthermore, Authorities warn motorists to be cautious of potential rockfalls from the areas affected by the crisis.

Pass closed over weekend over blaze

The earlier blaze outside of Ceres had prompted authorities to close Mitchell’s Pass with the municipality confirming more on the situation.

“Fire teams responded to a fire on the Witels River side that was reported at 4.40pm. The fire jumped the Mitchell’s Pass road and the pass is currently closed. Full ground and aerial support has been deployed,” the municipality said in a statement at the time

The fires were believed to have been started by lightning but emergency service personnel had managed to protect nearby wine farms and property from the flames.

“The fire crews on the Montagu/Koo Valley side of the mountain responded to a flare-up in the latter part of yesterday.  The team reports that through a combination of resources aided by the cooler night air, they were able to bring the fire under control. Monitoring will continue throughout the day.”