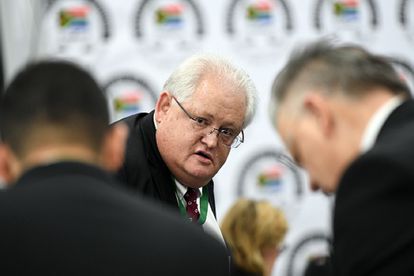 Former Bosasa COO Angelo Agrizzi during his appearance at the commission of inquiry into state capture on October 09, 2019 in Johannesburg, South Africa. Agrizzi was expected to be cross-examined by former Armscor chief executive officer Kevin Wakeford when proceedings were postponed in relation to information contained in files held by curators of Bosasa, which has not been made available to the commission. Image: Dlangamandla/Netwerk24/Gallo Images via Getty Images.

Former Bosasa COO Angelo Agrizzi during his appearance at the commission of inquiry into state capture on October 09, 2019 in Johannesburg, South Africa. Agrizzi was expected to be cross-examined by former Armscor chief executive officer Kevin Wakeford when proceedings were postponed in relation to information contained in files held by curators of Bosasa, which has not been made available to the commission. Image: Dlangamandla/Netwerk24/Gallo Images via Getty Images.

The first part of the State Capture report was handed to President Cyril Ramphosa on Tuesday, 4 January. Shortly after, it was released to the public.

In the 874-page State Capture report, Zondo says the link between the granting of corrupt tenders and political party financing represents “an existential threat” to South Africa’s democracy.

“It is inconceivable that political parties should finance themselves from the proceeds of crime, and yet there is alarming evidence to that effect,” says Zondo.

The report details examples where corrupt dealings resulted in the granting of “high value” contracts – in two of these instances the proceeds of corruption were to a political party – the ANC, both times.

The governing party’s notorious relationship with now-defunct prison company BOSASA is also highlighted and ill-gotten funds are believed to have filtered into ANC coffers, as the company made several donations to the party over the years.

The report says the late Joburg Mayor Geoff Makhubo, who died of COVID-19 in 2021, was involved in dodgy dealings with EOH – a South African company that specialises in providing government and businesses with technology services.

It is alleged that a front company was used to funnel money to the ANC.

“According to the evidence Mr Makhubo had solicited a donation to the ANC from EOH and had repeated that request a week after the contract had been awarded to EOH.

“According to the evidence of Mr Van Coller some R50 million was donated to the ANC by EOH for the 2016 local government elections,” reads the report.

Blackhead was handed a number of lucrative contracts, including an asbestos audit tender worth R255 million in 2014.

The funds allegedly made their way back to the ANC during the period between 2013 and 2018, as the firm paid millions of rands to the party.

Zondo says the Commission heard that BOSASA was “deeply involved” in corruption for years and received tenders from government departments – The Department of Correctional Services and Home Affairs – as well as parastatals such as the Airports Company.

The evidence showed that the defunct company made several donations to the ANC in cash and in kind. Presumably, some of these donations were tainted.

“It cannot be that it only gave the ANC ‘clean’ money or that it did not spend ‘dirty’ money on the ANC,” says Zondo.

ANC PROMISES TO USE THE REPORT TO FIX UP

Shortly after the State Capture report was released to the public, ANC spokesperson Pule Mabe issued a statement that said the party supports the objectives and work of the Zondo Commission even though the party itself will be placed under scrutiny by the report.

“As an organisation, the ANC will engage with the findings and recommendations of the Commission as the parts of the report become available and consider how these can help the process of fundamental renewal and rebuilding within our movement,” said Mabe.

The ANC said its National Executive Committee will put mechanisms in place to deal with any parts of the report that pertain to the party, its deployees or members.

The Acting Chief Justice said the evidence before the Commission did not seek to investigate the full extent of corruption associated with political party funding – and therefore, it is unclear whether other political parties may have benefitted in the same way as the ANC.

However, the alarm bells are sounding and Zondo says the National Prosecuting Authority (NPA) must prioritise the above-mentioned cases. This is just one of the steps needed to address the problem, according to the report.

“Legislation is required to prevent, expose and criminalise such activity. Thus far, the National Assembly has been tentative in addressing this problem…” says Zondo.

He describes the Political Party Funding Act No. 6 of 2018 (PPFA), which requires political parties to disclose all donations to the IEC, as a first – but ineffectual – step.

According to Zondo, the PPFA does not go as far as it should and provision must be made to block donations linked to the granting of tenders.

“The making of any such donations by a prospective tenderer or by a successful tenderer within an extended period of time must be made to constitute a criminal offence as must the receipt of any such payment whether such payment is made directly into the coffers of the political party or by some indirect means,” reads the report.

For this to be effective, the Acting Chief Justice says lawmakers must make changes that require external inspections of both parties – tenderers and political parties – by a designated authority with powers of search and seizure.

“Significant monetary penalties need also to be imposed both on the tenderer and on the political party in the event of a breach of these provisions,” says Zondo.