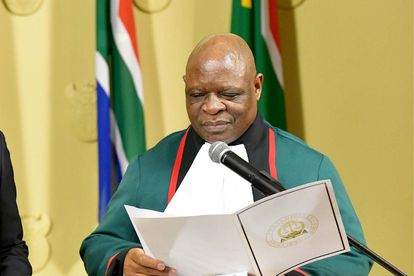 Zondo is set to hand Ramaphosa the report in early 2022. Photo: GCIS/ Flickr

Zondo is set to hand Ramaphosa the report in early 2022. Photo: GCIS/ Flickr

The Presidency has confirmed that Cyril Ramaphosa has given the Zondo Commission a deadline for its report into state capture allegations.

Minister in the Presidency Mondli Gungubele says that Ramaphosa expects Zondo to conclude his report into a three year inquiry on January 1.

Gungubele says hopes are high that the report will enable the state to fight corruption.

“Cabinet anticipates that in addition to exposing the perpetrators of corruption, this report will also provide us with proposals to strengthen our systems to prevent corruption,”

Minister in the Presidency Mondli Gungubele

The inquiry has been ongoing since being established in 2018 to probe allegations of state capture.

While the initial plan had been for the commission to only run for a few months, numerous extensions have been granted.

This latest extension had given Deputy Chief Justice Raymond Zondo until the end of this year. The decision was handed down by the North Gauteng High Court.

Corruption outside Inquiry in spotlight

The Minister noted that the Special Investigating Unit also had its hands full dealing with corruption cases. The SIU is tasked with recovering the billions siphoned from the state through graft.

This comes after Gungubele answered to the Standing Committee on Public Accounts. Previously, Members of Parliament had demanded action on SIU reports detailing widespread corruption.

The Minister explained that the High Court is presiding over 56 cases. In total, the cases amount to R62 billion. In addition to this, Gungubele confirmed a further 64 cases in the Special Tribunal. These cases are valued at R7 billion.

Gungubele further explained that the SIU has frozen pensions and bank accounts across the board. Government officials, individuals and companies affected by the move are implicated in corruption to the tune of R43 billion.

In conclusion, corruption seems to be a never ending cycle in South Africa. Zondo’s task of probing graft at the highest levels is hardly an enviable one. With the likes of Ramaphosa, Jacob Zuma and many other political titans in the mix the nation can be sure the outcome of the inquiry will be quite the spectacle.