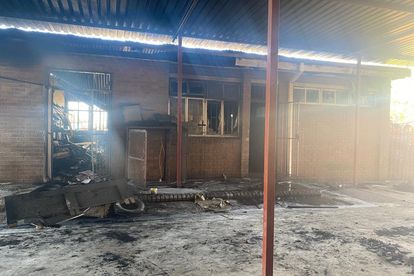 A storeroom, itchen and tuckshop were ravaged by fire at Gaetsho Secondary School in North West. Image: North West Department of Education.

A storeroom, itchen and tuckshop were ravaged by fire at Gaetsho Secondary School in North West. Image: North West Department of Education.

The North West Department of Education has called for the arrest of those allegedly behind the torching of a kitchen, storeroom and tuck shop at Gaetsho Secondary School near Lichtenburg.

It is alleged that on Tuesday night, 15 August 2022, around 20:00 the principal received a call from a community member that the school was on fire. The fire department and the police were immediately called to the scene.

According to the North West Department of Education, the raging fire took about 5 hours to be fully extinguished.

The MEC for Education in the province,  Mmaphefo Matsemela called for those behind the fire to be arrested.

Matsemela said as a department, they are extremely disappointed by this horrible incident.

“This is aimed at derailing our efforts of providing a conducive learning environment to the learners in schools,” she said.

Matsemela has since called for those that are  behind what she termed a barbaric incident to face the full might of the law.

“We are happy that teaching and learning is continuing without any disturbance,” she said.

Fortunately, Gaetsho Secondary has a new kitchen which was completed late last year which the school hadn’t been using.

Four gas stoves, six big pots, a fridge and some groceries were damaged by the fire.

Malindi added that the school in the meantime has borrowed alternative stoves from the local business people. The cause of the fire is still unknown and a case of arson has been opened with the local police.