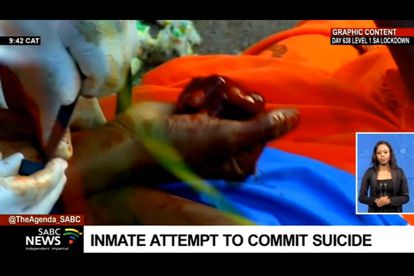 A Limpopo prisoner at the Thohoyandou Correctional Facility attempted to die by suicide during a prison raid on Friday morning, 24 December. A SABC News crew covering the operation was present during the incident.

According to the public broadcaster, the Limpopo prisoner started cutting himself – all over his body – with a razor in front of its cameras and the Acting National Commissioner of Correctional Services Makgothi Thobakgale.

The prisoner in question was found in possession of drugs and a cellphone. The SABC said he sliced his neck and lost a lot of blood before being taken away for medical treatment.

Thobakgale said the prison raid “saved a life” by removing dangerous tools. He believes the prisoner may have attempted to die by suicide some other time.

“If we don’t search, we won’t be able to discover those things. He was probably going to do it in our absence. Today we saved a life by coming here to do this,” said the Correctional Services boss to the SABC.

According to the broadcaster’s journalist, Pimani Baloyi, the prisoner is fine and he is receiving medical treatment and psychological care.