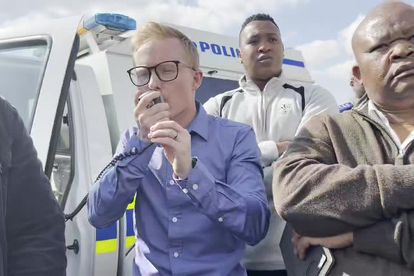 Following tensions in the small town of Howick in the Midlands over power, the mayor of uMngeni Municipality Chris Pappas was eventually heard and understood by the disgruntled residents, thanks to his natural ability to communicate in the dominant IsiZulu language.

Earlier today, Tuesday, 12 July, Pappas met with protesters on the R617 where he addressed them and listened to their concerns.

Some areas of Mpophomeni plunged into the dark after an overloaded transformer gave up on the residents. Before repairing the issue, Pappas recommended a meter audit across the community to ascertain who is bridging the power supply, however; this plan was aggressively rejected and led to protest action in the town.

“The municipality is still committed to bringing back power in the affected area in order to do this we need to find the source of the problem by auditing the affected homes,” said Pappas.

According to the municipal page, during the visit today affected residents were clear that they want the matter resolved and are more than willing to have their meters audited.

“It is clear for all to see that this issue is not about electricity, it is a group of people who are sent by their political leaders, operating in the shadows to cause instability in uMngeni,” mayor Pappas reflected on the crisis.

“We would like to assure the public that we are working around the clock to bring back stability in uMngeni. We urge all residents and businesses to be vigilant in the CBD as the protest continues,” he concluded.