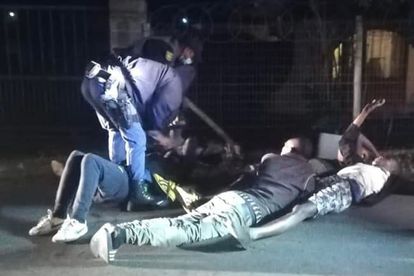 Five teenagers aged between 17 and 19 were arrested after they were allegedly caught red handed stealing a bakkie in Ottawa, KwaZulu-Natal (KZN) on Wednesday.

The arrest and recovery was reportedly made after a member of the public contacted private security, Reaction Unit South Africa (RUSA), when they noticed a group of males pushing a bakkie and attempting to kick start it.

TEENAGERS ARRESTED FOR STEALING A BAKKIE

According to RUSA, following the tip off from the member of the public, an officer was immediately dispatched to investigate.

On arrival at approximately 00:21, the suspects were seen pushing the bakkie towards Kissoon Road.

RUSA spokesperson, Prem Balram said when the teenagers noticed the approaching RUSA member, they attempted to flee. Fortunately the officer managed to apprehend four suspects. A fifth suspect was apprehended by another private security company.

Balram said during questioning one of the teenagers attempted to convince officers that the bakkie belonged to his father. A registration check confirmed that the vehicle was not stolen.

“The five suspects were placed under arrest and detained at the Verulam SAPS.”

In a separate incident, KZN police arrested seven suspected armed robbers who were caught red handed in a traditional healer’s house while for cleansing and protection in KwaDukuza.

The suspects had allegedly robbed a business at the Upper Tugela in Bergville. Police received a tip-off and proceeded to the traditional healer’s homestead in KwaDukuza where they spotted the said vehicle and approached the suspects.

The suspects allegedly stole the cash and drove away in their gateway vehicle. The matter was reported to the police and a case of robbery was opened for investigation.