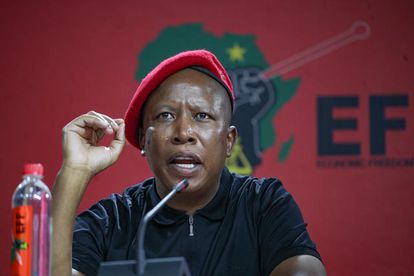 JOHANNESBURG, SOUTH AFRICA – NOVEMBER 16: Julius Malema addresses the media at Winnie Madikizela Mandela House on November 16, 2021 in Johannesburg, South Africa. It is reported that political parties in hung municipalities have until 23 November to form coalitions and metros that are hung are Johannesburg, Ekurhuleni, Nelson Mandela Bay, Tshwane and eThekwini. Photo: Gallo Images/Sharon Seretlo

JOHANNESBURG, SOUTH AFRICA – NOVEMBER 16: Julius Malema addresses the media at Winnie Madikizela Mandela House on November 16, 2021 in Johannesburg, South Africa. It is reported that political parties in hung municipalities have until 23 November to form coalitions and metros that are hung are Johannesburg, Ekurhuleni, Nelson Mandela Bay, Tshwane and eThekwini. Photo: Gallo Images/Sharon Seretlo

Members of Parliament debated the amendment of Section 25 of the Constitution to allow for land expropriation without compensation on Tuesday, 7 December. Economic Freedom Fighters (EFF) leader Julius Malema said the party rejects the Bill because it will set back African people’s struggle for land repossession.

The ANC’s Dr Mathole Motshekga opened the debate on the 18th Amendment Bill on Tuesday with a “history lesson.”

He said the “original sin” was when indigenous African people were dispossessed of the land by the Dutch and British settlers. In his lengthy speech, he cast aspersions at the parties that would not accept the Bill and said “unholy coalitions” – referring to the 2021 Local Government Elections, which saw the ANC lose power across the country – would soon collapse and the electorate would return to the ruling party.

She said the Bill creates uncertainty around property rights, which is not what the country needs as the economy recovers from the impact of the pandemic and added that the Bill fails the Constitutional test.

Julius Malema also rejected the Bill on behalf of the EFF. He said that the Bill that parliament is asked to approve today will take African people’s struggle for land repossession many steps back.

Malema said the ANC hijacked the land expropriation without compensation parliamentary process and said the party is “hell-bent” on protecting the interests “of  the white settler minority.” He accused the party of being completely captured by “white monopoly capital.”

The EFF leader said the current Bill makes meaningless provisions for the state to be the custodian of “certain land” without defining what “certain land” entails.

The EFF took issue with the concept of “nil compensation” in the Bill, which they say was not present when parliament adopted the EFF’s land expropriation without compensation motion in 2018 and when it was adopted in the report of the Constitutional Review Committee.

Malema said “nil compensation” was vague and the party rejects it simply because of its vagueness as it would allow for limited instances in which compensation for land could be offered at below the market value of the land.

“If this Bill is allowed to pass, it would signify a sell-out position and a further disenfranchisement of black people.

“The practical implications of this Bill would be far worse that the current Property Clause of the Constitution.

“We reject this Bill and call on the millions of our people to do whatever it takes to get their land back.

“We tried, but the parliamentary process was hijacked by the ANC and their handlers, and unless we have an overwhelming majority in parliament, black people will stay landless in this country,” said Malema.

Other parties including the IFP, FF+, ACDP and others had expressed their opposition to the Bill by the time of publication.