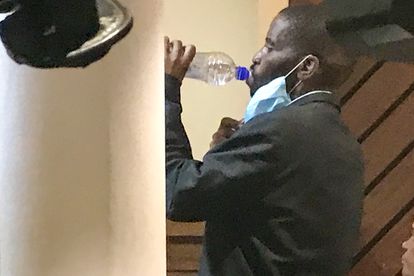 Alleged Parliament arsonist Zandile Christmas Mafe is expected to appear in the Cape Town Regional Court on Friday, 4 February, where Magistrate Michelle Adams will hand down her judgement in his bail application.

MAFE TO LEARN FATE ON FRIDAY

Senior State Advocate Mervyn Menigo and Mafe’s defence, led by Dali Mpofu, went head to head for eight hours on Saturday, 29 January. The accused was on the witness stand for most of the day.

When his defence led him through evidence, Mafe told Magistrate Adams that he intends to plead not guilty to the charges he is faced with – housebreaking with intent to commit terrorism and arson, terrorism, arson and theft – and would not deal with the merits of the case during the bail application.

When the State cross-examined Mafe, he kept mum and said: “no comment” to most of the questions posed at him – even when Mengo read out an affidavit that contained the accused’s alleged confession.

According to the affidavit of the investigating officer, Colonel Christian Theron, Mafe threatened to repeat his actions if his demands are not met. The accused allegedly said he wants President Ramaphosa to resign; he wants Janusz Walus to be released from prison and he wants unemployed people to receive a R1500 grant.

Mpofu questioned the admissibility of Theron’s affidavit and the video evidence the State said it is in possession of. This will be tested when the matter goes to trial.

As Mafe was charged with a Schedule 6 offence, the onus was on his legal team to provide exceptional circumstances that would justify his release on bail. The defence listed 12 such circumstances, including Mafe’s unlawful referral to Valkenberg for mental evaluation, which was set aside by the High Court.

The State argued that the 12 circumstances were thumb sucked. “The applicant relies on his circumstances which although dire, are unfortunately common. He has not mounted an attack on the strength of the state’s case,” said Menigo.

The State also argued that Mafe is a flight risk because of the severity of the charges he faces, which could see him sentenced to life imprisonment if he is found guilty.

Mafe said he has no intention of running away because he intends to sue the State for wrongful arrest.

The judgement is expected to be delivered at 11:00 on Friday.