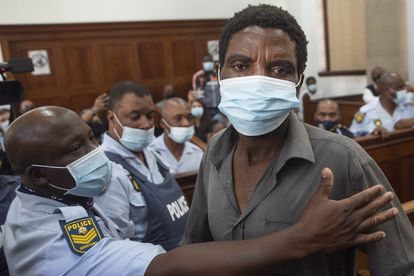 In an unsigned founding affidavit submitted to the Western Cape High Court on Saturday, 15 January, Zandile Mafe – the man accused of starting the parliament fire – offered his account of the events that led to his arrest on 2 January.

Mafe’s legal team – spearheaded by Dali Mpofu and Luvuyo Godla – submitted the affidavit, which was seen by The South African, to the court as part of the accused’s urgent bail application, which was not heard.

National Prosecuting Authority (NPA) spokesperson in the Western Cape Eric Ntabazalila said the alleged Parliament arsonist is contesting the order made by the Cape Town Magistrate’s Court that confined him to Valkenberg Psychiatric Hospital.

Hlophe explained to the legal teams that a review of a decision taken by a magistrate cannot be presided over by a single judge and as he was the only judge on duty that matter will be heard by himself and another judge on Tuesday, 18 January at 16:00.

“After hearing the parties’ arguments on Tuesday, the judges are likely to make an order by the end of the day which will pave the way for the bail application to be heard next Saturday,” said Ntabazalila.

The State confirmed on Saturday that it would oppose both the Valkenberg referral application and the bail application if it comes to that.

In the affidavit, Mafe said he was arrested after 6:00 in the morning. He said he was sleeping outside the parliamentary precinct when members of the South African Police Service (SAPS) awakened him. This, said, Mafe was the first time he noticed that Parliament was on fire “with black smoke escaping from the roof.”

The accused explained that he is so poor that sometimes he cannot afford to travel home to Khayelitsha from the City, which is why he slept on the streets like “many thousands of very poor people in the country.”

“One of my spots for doing so is the vicinity of Parliament. Even in these times I manage to go back to my shack in Khayelitsha to ensure its safety and to change my clothing,” said Mafe.

Mafe said since his arrival in the Western Cape, from North West, he has worked menial jobs to make ends meet.

“I do not know what the contents of the boxes were. My own belongings were conﬁscated by the SAPS,” said Mafe.

Mafe claims the police accused him of starting the fire, which he denied, before being booked into the Cape Town Central Police Station.

“At the place, an unknown white man told me that I would be sentenced to death for burning Parliament unless I cooperated with them.

“I was terriﬁed and as a result, I promised to ‘cooperate’ with whatever they may require of me,” said Mafe.

Mafe remarked that the “white man” made an empty promise as it is two weeks later and he is still in police custody.

He said the police took him to his home in Site B, Khayelitsha, on the same day and searched the premises.

‘I AM NOT A FLIGHT RISK,’ SAYS MAFE

Mafe said his affidavit was unsigned because of the “extreme urgency of the matter.” Adding that the content of the affidavit mirrors one he signed before a Commissioner of Oaths on 11 January.

“I am not a ﬂight risk and I have a ﬁxed address. I am a South African, and I have never lived in or travelled to any other country outside of South Africa. I do not hold any passport or other travel documentation to allow me travel to other countries,” said Mafe, as one of several reasons why he should be granted bail.

“I am not a terrorist. I am an ordinary and destitute South African like millions of my fellow citizens. Like them I am angry about my conditions but I am not a violent man. I am also not insane,” added the accused.

He said he would not discuss the merits of the case but maintains his innocence and said he intends to initiate civil proceedings against the State to claim damages for “wrongful arrest, malicious prosecution, and the violation of my rights to freedom and human dignity.”

In his affidavit, Mafe said he went to sleep hungry too many times to count and was “unassisted by the state.”

“I am now placed in a position where I have food and water by the state, all at the expense of my liberty. As a result, I have decided [to] embark on a hunger strike, if necessary, to the death.

“I will not be further humiliated beyond my miserable life up to now. I will only take food which is not supplied by this uncaring government,” said the accused.

Outside court on Saturday, Godla confirmed that the accused is on a hunger strike and said attempts to get him to eat had been unsuccessful.

However, the lawyer remarked that the defence had left court “happy” for the first time and was hopeful that the news would change Mafe’s mind – “Now that there is some progress – because for the very first time we walk out of court happy. We will go to him and convince him that the wheels of justice are moving.”

In an answering affidavit, also seen by The South African, Advocate Adrian Gelderblom, on behalf of the Acting Director of Public Prosecutions in the Western Cape, objected to most of the concerns raised.

“The Applicant has not deposed to a founding affidavit, and the copy served received is not signed.

The State argued that Mafe’s preliminary diagnosis with paranoid schizophrenia by District Surgeon Dr Zelda van Tonder made the unsigned founding affidavit inadmissible in court because if Mafe indeed suffers from the illness it “goes directly to his mental facilities and ability to understand proceedings and provide truthful and accurate information.”

In his affidavit, Mafe said the fact that he was not able to consult his own psychiatrist before referral to Valkenberg is “questionable and draconian.” He said he believes members of the public will assist him with the funds necessary “to refute the alleged allegations of the State psychiatrist.”

“If I am kept further in such cruel custody I may as well become disturbed and the state will have achieved a self-fulfilling prophecy,” added the accused.