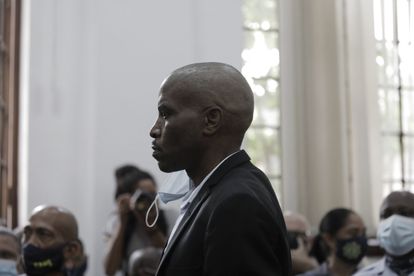 Zandile Christmas Mafe, a suspect in connection to a fire at the South African Parliament, appears at the Magistrate Court in Cape Town on January 11, 2022. – He is suspected of starting a devastating fire that gutted South Africa’s parliament.
A blaze broke out in the Cape Town complex before dawn on January 2, 2022 spreading to the National Assembly, the roof of which collapsed. (Photo by GIANLUIGI GUERCIA / AFP)

Zandile Christmas Mafe, a suspect in connection to a fire at the South African Parliament, appears at the Magistrate Court in Cape Town on January 11, 2022. – He is suspected of starting a devastating fire that gutted South Africa’s parliament.
A blaze broke out in the Cape Town complex before dawn on January 2, 2022 spreading to the National Assembly, the roof of which collapsed. (Photo by GIANLUIGI GUERCIA / AFP)

Alleged parliament arsonist, Zandile Mafe’s legal team is expected to challenge the Magistrate Court order that referred him to Valkenberg Psychiatric Hospital for 30 days of observation, on Tuesday, 18 January.

On Saturday, 15 January, Mafe’s legal team brought an urgent bail application in the Western Cape High Court on his behalf. It could not be heard because the 49-year-old who stands accused of arson and terrorism is an inpatient at Valkenberg.

Judge President John Hlophe said before the bail application can be heard – the decision made by Magistrate Zamekile Mbalo on Tuesday, 11 January would have to be reviewed by two judges. This review will take place on Tuesday afternoon at 16:00.

Mafe’s team said they intend to challenge whether the correct procedures were followed by the lower court before referring the accused to Valkenberg.

“After hearing the parties’ arguments on Tuesday, the judges are likely to make an order by the end of the day which will pave the way for the bail application to be heard next Saturday,” said NPA spokesperson in the Western Cape Eric Ntabazalila.

Magistrate Mbalo’s decision came after the State argued for the accused to be admitted for mental assessment on the back of a preliminary paranoid schizophrenic diagnosis by District Surgeon Dr Zelda van Tonder on 3 January – the day after Mafe’s arrest.

Mafe’s lawyers – Senior Counsel Dali Mpofu and Luvuyo Godla – said the defence was served with the documents, which detailed the diagnosis and a fresh terrorism charge, an hour before the accused’s second court appearance.

They were taken by surprise. Or, as Mafe claimed, more bluntly, in an unsigned founding affidavit for the bail application – they were “ambushed.”

“It was a textbook case of an ambush which was inexplicable in the totality of the circumstances. My appeals for an intervention by the Learned Magistrate, unfortunately, fell on deaf ears,” said the accused.

In the affidavit, Mafe described his 30-day referral to Valkenberg for mental assessment without being allowed to consult his own psychiatrist as “questionable and draconian.”

“I have reason to believe that caring members of the public will assist me to raise funds to refute the alleged diagnosis of the state psychiatrist,” said the accused.

He furthered that he believes there is no reason why he cannot undergo evaluation as a “freeman.”

“If I am kept further in such cruel custody I may as well become disturbed and the state will have achieved a self-fulfilling prophecy,” said Mafe.

In an answering affidavit, the State said Mafe may not have “the requisite mental capacity” to make the deposition he apparently did in his unsigned founding affidavit.

The State argued that Mafe’s preliminary diagnosis with paranoid schizophrenia made the founding affidavit inadmissible in court because if the accused  indeed suffers from the illness it “goes directly to his mental facilities and ability to understand proceedings and provide truthful and accurate information.”

He is currently on a hunger strike.

‘We’re in hell’: Anele on why she’s NOT celebrating Women’s Day