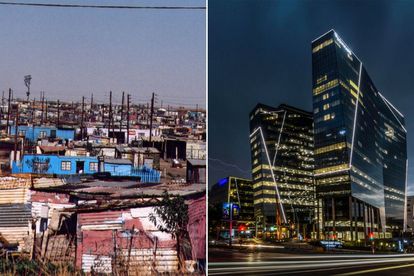 There are numerous driving factors that have contributed to inequality in South Africa. Photo: Eve74 and Paul Saad / Flickr

There are numerous driving factors that have contributed to inequality in South Africa. Photo: Eve74 and Paul Saad / Flickr

Inequality in Southern Africa is a report that was put through by the World Bank. Out of 164 countries, South Africa has topped the list of the most unequal nation in the world.

Race is the driving factor of inequality in South Africa

The report revealed that race is the key driver of high inequality within SA, reports EWN. The impact race has on education and labour markets can be felt nearly 30 years after the end of the Apartheid regime.

Botswana, Lesotho, Namibia and Eswatini are also quite high up on the list of the most unequal countries in the world.

There is a 38% pay gap between women and men in South Africa and Namibia. Women, on average, earn around 30% less than men who have the same level of education as they do.

Land is also a contributing factor due to its uneven distribution. Rural areas are focused on more. In Nambia, there are about 39.7 million hectares of commercial land. A whopping 70% of that land belongs to Namibian citizens of European descent.

When and why the Inequality in Southern Africa report was released

While the report was produced before the global pandemic, it was released on 9 March 2022. The authors used an indicator income inequality known as the Gini coefficient to rank the countries.

In more trending news, doctors and nurses are now taking food to starving patients at the Chris Hani Baragwanath Hospital after the hospital allegedly failed to pay suppliers.

According to DA Gauteng Shadow MEC for Health Jack Bloom there has been no bread for the past two weeks at the hospital.

This dire situation has forced some doctors and nurses to take food to feed starving patients. Bloom said donors have also been asked to provide food for the hospital. Read the full story here.