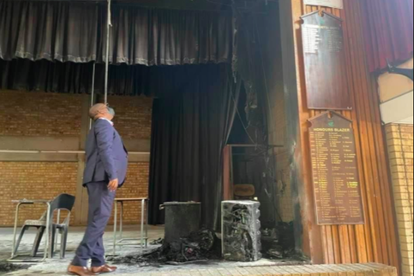 Stay informed with the latest news stories and headlines in South Africa on Wednesday 18 August 2021.

How badly must you hate to write an exam that you burn down the testing venue, in this case a school hall? At this stage we don’t know what convinced a group of schoolchildren from Glenvista High School in Gauteng to do the unthinkable, but we do know that it didn’t stop them from writing the exam anyway. If their fiery tactic was to delay the exam, they failed, and probably get an F for effort too. The learners had to sit for the exam outside.

The incident has raised the ire of Gauteng MEC for Education Panyaza Lesufi who visited the school to see the damage for himself.

The Gauteng Education Department said learners from the Glenvista High School in Johannesburg allegedly set their school hall on fire on Monday to avoid writing an exam. Despite the chaos, the exam went ahead, only this time, the learners had to write it outdoors.

A video was posted on Tuesday of the Glenvista high school hall on fire but at the time, nothing was confirmed.

Gauteng Education MEC Panyaza Lesufi later confirmed the news saying that the learners had allegedly burnt the school hall in protest of an exam. He confirmed this while visiting the school to assess the damage.

“Yesterday [Monday] they burnt the school hall because they didn’t want to write an exam. Today, they wrote the exams outside. So sad.”

Like we said earlier though, those learners still had to write their exam, just in a different setting and pictures have been provided.

The National Prosecuting Authority of South Africa (NPA) announced the withdrawal of prosecution against television personality Bishop Israel Makamu on Tuesday, 17 August. Makumu was accused of attempting to sexually assault a woman employed by his church in 2018. The complainant recently opted to drop the charges.

NPA Gauteng spokesperson, Phindi Mjonondwane, said the state withdrew the charges against Makamu following a consultation session with the complainant who eventually filed a withdrawal of her original statement.

“Makamu was released on R2000 bail after making a brief appearance on a charge of sexual assault at the Palm Ridge Magistrate’s Court on 26 May 2021,” said Mjondwane.

The complainant – a former employee of Makamu’s church – laid a charge with the Brackendowns South African Police Service (SAPS) on 19 May 2021. The incident reported to the police allegedly happened in Makumu’s church office in Alfrode in September 2018.

“After careful consideration of all evidence and the mediation process between the complainant and Makamu, the NPA is convinced that the interest of justice dictates that prosecution no longer be pursued,” said Mjonondwane.

A 24-year-old woman, who was a passenger, was killed in a motor vehicle accident in Camps Bay, Cape Town on Saturday, 14 August. The South African Police Service (SAPS) is calling on the public to come forward with information that may assist their investigation into the matter.

According to the police, the accident took place on Saturday night at approximately 22:30 in Camps Bay. Police spokesperson Warrant Officer Joseph Swartbooi said the driver of a BMW reportedly lost control of his vehicle and collided with a rock “that was laying in the road.”

The rock was reportedly on Victoria Road, Bakoven near Oudekraal. The passenger sustained fatal injuries during the crash and was declared dead by medical personnel at the scene of the accident.

“The circumstances surrounding this incident are under investigation,” said Swartbooi.

Cheetahs on the loose in Northern Cape, MEC urges caution

Residents of Kuruman in the Northern Cape are warned to exercise caution as there are four cheetahs on the loose in the area, according to the South African government, on Tuesday, 17 August. The Department of Agriculture, Environmental Affairs, Rural Development and Land Reform (DALRRD) advised the public to not hurt the big cats but rather call the authorities if they are spotted.

DARLRDD spokesperson Zandile Luphala told SABC News that the cheetahs are currently on the loose in the John Taolo Gaetsewe District of Kuruman.

The departmental spokesperson said the cheetahs are believed to be in the areas around Tsineng, Matlhwaring and Ga-Sese River.

“The animals are reported to be between the communal land and private farms in and around the mentioned areas,” said Luphala.

A 12-year-old boy and his uncle died of electrocution on Saturday, 14 August, while harvesting avocados from a tree in Ekangala, Gauteng. Eskom and the South African Police Service (SAPS) are investigating the matter.

The 12-year-old was reportedly using a steel pipe with a wire to harvest from a tree and accidentally made contact with an overhead electricity line, according to Eskom’s preliminary investigation into the incident.

The boy was electrocuted and unfortunately, his uncle suffered the same fate when he attempted to help. Eskom said the police and paramedics declared them both dead at the scene.

Watch: Deaths confirmed as Russian plane plummets to the ground

A Russian plane exploded into a fireball after smashing into the ground earlier on Tuesday – and the whole event was captured on camera. The harrowing scenes show the final moments of a military test flight, and three people on board the aircraft have been confirmed as fatalities by local authorities.

According to state media, the downed Russian plane will be subject to an extensive probe, with authorities already suspecting ‘human error’ for the crash. The post-mortem has begun in earnest, and we’ve since learned the following: