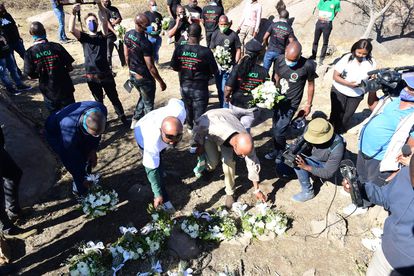 Marikana mine worker’s affiliated to AMCU lay wreath at the Koppie in commemoration of Marikana Massacre on August 16, 2020 in Rustenburg, South Africa. The Marikana massacre is a fatal incident that took place at the Lonmin Platinum mine on 16 August 2012 where 37 workers were killed during a peaceful protest. (Photo by Gallo Images/Daily Sun/Morapedi Mashashe)

Marikana mine worker’s affiliated to AMCU lay wreath at the Koppie in commemoration of Marikana Massacre on August 16, 2020 in Rustenburg, South Africa. The Marikana massacre is a fatal incident that took place at the Lonmin Platinum mine on 16 August 2012 where 37 workers were killed during a peaceful protest. (Photo by Gallo Images/Daily Sun/Morapedi Mashashe)

We’ve got all the latest news stories and headlines in South Africa you really need to know on Tuesday 17 August 2021.

Nine years after the Marikana massacre the victims are remembered and analysts are still asking what has changed? Some widows and families of the victims have not been paid their promised compensation, no one has been jailed for any of the deaths that occurred on that fateful day, and the country is no better off in dealing with labour disputes on a large scale.

In other news, you can expect the petrol price to go up again next month. Meanwhile, President Cyril Ramaphosa believes that the state capture era is over and all that remains is straightforward corruption. Think about that.

A bride who called her invited wedding guest’s “lazy f****” and their children “little shits” on her wedding invitation instructions went viral on social media when her cousin shared her cringeworthy comments on “Reddit” recently.

Under the heading dietary requirements she told guests “Eat what you’re given, you fat fuck” and “leave your little S*** at home. We want to get f***** up. (We will turn you away)”.

Guests were further advised to “wear whatever the f*** you want— go butt f*** naked for all we care.” She told her “lazy f***” guests to google hotels and taxis and to follow the f****** directions we gave you, dumbass”.

Although no petrol price increase is ever a welcome one, the picture for September does look a little less stressful than what we’ve witnessed over the past few months. Meanwhile, there’s good news for diesel and paraffin users.

Following a series of devastating increases – creating a record petrol price in the process – the situation seems to have stabilised this month. According to the Central Energy Fund, the 95 Grade of petrol will rise by a meagre seven cents per litre, and 93 grade is on course for an uptick of just two cents p/l.

The wholesale cost of diesel is set to go DOWN by 12 cents per litre, and illuminating paraffin will also inch towards a cheaper value, by seven cents per litre. Despite this minimal relief, there’s not a great deal to celebrate

Ramaphosa: ‘State Capture era is over, but corruption isn’t’

President Cyril Ramaphosa has used his latest newsletter to reflect on state capture, particularly after he himself made his last appearance before the State Capture Commission and as it wraps up its work.

The commission, led by Deputy Chief Justice Raymond Zondo, is now nearing its end, more than three years after it began hearing shocking claims pertaining to corruption and graft under the tenure of Ramaphosa’s successor, Jacob Zuma.

“This exposure of the nature, extent and depth of state capture did not take place behind closed doors, but was broadcast to the entire country. By allowing all South Africans to follow the commission’s proceedings, it has helped to instill public confidence in our democracy in the way it promotes openness and transparency,” Ramaphosa said.

He added that the country owes its gratitude to people who took part in the commission’s work, including those who investigated, researched and compiled a huge amount of information.

Marikana Tragedy: Some widows & families not yet paid, says Amcu

Exactly nine years after the Marikana killings, some of the widows and family members of the victims are yet to receive their due compensation from government.

Monday, 16 August 2021 marks the nineth anniversary of the tragedy: In 2012, 34 mineworkers who were on strike for better wages at Lonmin’s North West platinum mine, were gunned down by police following days of unrest and clashes.

“It is quite sad that even today, no justice has been served. Some of the workers who were seriously injured have still not been paid, nine years down the line. It shows clearly that the government that purports to be a caring government, we haven’t experienced through the workers of Marikana or the victims of the massacre,” said Joseph Mathunjwa, the president of the Association of Mineworkers and Construction Union (Amcu) in an interview with eNCA.

When a group of men tried to execute a robbery at a mall in Durban on Monday morning, they probably weren’t expecting their target – a man depositing cash into an ATM – to respond with gunfire.

Dramatic footage has surfaced of the incident, in which two armed men can be seen fleeing the Musgrave Centre in Durban for their lives, with the target of their foiled robbery attempt firing at them.

South African Police Service (SAPS) spokesperson Colonel Thembeka Mbele said that a case of armed robbery has been opened today at Berea police station for further investigation after the incident, which was captured on video from a nearby building.

The latest COVID-19 figures released on Monday evening report that cases have increased by 7 983 in the last 24-hours, meaning that the total number of infections that have been accumulatively reported since March 2020 has risen to 2 613 5961.

Sadly, over the last 24-hours alone, a further 299 people have died from COVID-19, meaning that a total of 77 440 people have succumbed to the virus since the first death in March 2020.