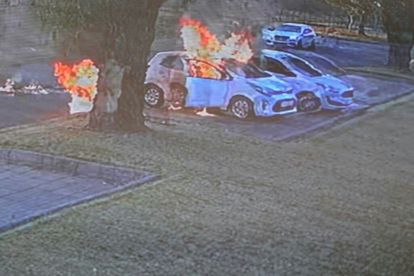 We’ve got all the latest news stories and headlines in South Africa you really need to know on Tuesday 14 September 2021.

There seems to be no limit to how depraved some men can be when it comes to attacking women in South Africa. Yet another horrendous case of gender-based violence. This time the victim is a mother living in Benoni, Gauteng. She was doused in petrol and set alight outside her daughter’s pre-school. Just when we think nothing could surprise us, it does.

Benoni mom ‘petrol-bombed’ in her car – allegedly by spouse

Horrible, horrible stuff: A mother from Benoni, Gauteng is fighting for her life in ICU alongside another female victim, after her vehicle was doused in petrol and set alight by a man believed to be her spouse.

The shocking scenes played out in front of a pre-school, where the daughter of the badly burnt driver attends classes. It’s understood that the male suspect poured petrol over himself AND the car, before igniting the flammable liquid.

The man at the centre of this mindless and violent act suffered critical burns, whereas the women involved were diagnosed with ‘serious burn wounds’ by Fire Services at the scene.

All children aged between 12 and 15 years should be offered but not required to take vaccinations against coronavirus, the chief medical officers who advise the UK’s four governments, said on Monday.

Britain has been one of the country’s hardest hit by Covid-19, recording more than 134,000 deaths of those catching the disease.

Despite a successful vaccination programme, case rates remain stubbornly high due to the emergence of the Delta variant, and officials are anxious about them rising further now that schools have returned after the summer break.

Vaccinating children has become a thorny issue, despite other countries pushing ahead with jabs.

Joint Committee on Vaccination and Immunisation (JCVI), which advises UK health departments on immunisation, currently says the “margin of benefit, based primarily on a health perspective, is considered too small to support advice on a universal programme of vaccination of otherwise healthy 12 to 15-year-old children at this time”.

But the chief medical officers (CMO) of England, Scotland, Wales and Northern Ireland said the vaccines should be made available, after taking into account wider issues such as education and mental health.

The CMOs said vaccinating 12-15 year-olds “will help reduce transmission of Covid-19 in schools”, with around three million children potentially eligible for the first dose of the Pfizer vaccine.

Reunited! Baby stolen in Cape Town hijacking now back with his mom

All too often, stories of criminality in South Africa don’t come with a happy ending. However, we are pleased to report that this particular incident has come to a rather heartwarming conclusion. Thanks to the efforts of both community forums and diligent police officers in Cape Town, a baby stolen in a hijacking this morning has made it home safely.

The second phase of the Gauteng Education Department’s online applications opened on Monday, 13 September. The current phase of applications is expected to last until October and is meant for parents and guardians whose children are starting primary or secondary school in 2022 or those who missed out on the first phase.

The Gauteng Education Department said more than 73 000 successful Grade 1 and 8 applications were received by 12:00 on Monday, the first day of Phase 2 2022 Online Admissions applications.

“As of 12 noon, a total of 73 305 successful Grade 1 and 8 applications were recorded on our system,” said the department.

“Of the total figure, the number of applications recorded for Grade 1 are 69 300 and Grade 8 recorded 3981 applications.”

The provincial education department said Phase 2 was initially intended to be for parents and guardians with children that would be attending Grade 1 and 8 next year at Gauteng public schools. However, the department realised that there were several parents and guardians that were unable to apply on time during the first phase – for learners in Grade 7 at public schools – therefore the criteria was expanded.

Covid-19 third wave shows a ‘fluctuation’ in cases in KZN

KwaZulu-Natal’s third wave of the Covid-19 pandemic has been characterised by a fluctuation in the number of new cases, hospitalisations and deaths premier Sihle Zikalala said.

“Thankfully, the curve so far appears to have been less severe this time around, when compared to the second wave,” Zikalala told journalists at a media briefing on Sunday.

“It has also been driven by clusters in schools, meaning that a high number of learners and educators have been affected in Ethekwini, Umgungundlovu, King Cetshwayo, Umkhanyakude and Ilembe districts,” Zikalala said.

A number of cluster cases had also been detected at the province’s prisons, which affected both employees and inmates. Hospitals in KZN, in both the public and private sectors, had a total of 1 940 patients admitted for Covid-19 as at Friday 10 September.

During his address to the nation on Sunday 12 September, President Cyril Ramaphosa insisted that government remains committed to providing South Africa’s most vulnerable people with financial support to see them through the devastating impact of the COVID-19 pandemic. Ramaphosa said that to date, a total of 8.3 million people have successfully applied for the SASSA Social Relief of Distress (SRD) grant, with payments currently being administered.

The South African Social Securities Agency (SASSA) has received a total of 13 million applications since the SRD grant was reopened in August 2021, with just over 3.7 million applications being declined, “mainly because applicants have other identified sources of income or are registered for assistance like UIF and NSFAS”.

During his address, Ramaphosa said that the SRD grant is critical in assisting members of the South African public with no other form of income or aid. South Africa was moved to Adjusted Level 2 lockdown on Monday, with government satisfied that declining daily infections rates allow for the broader reopening of the economy and greater freedom of movement.