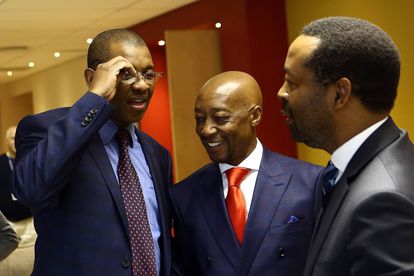 PRETORIA, SOUTH AFRICA  JUNE 29: Suspended SARS Commissioner Tom Moyane is flanked by his legal team, advocate Dali Mpofu and Eric Mabuza during a break in the proceedings of the Nugent commission of inquiry on tax government and administration on June 29, 2018 in Pretoria, South Africa. Moyanes lawyer, advocate Dali Mpofu said an inquiry into the operation of the agency should be halted pending a disciplinary hearing against his client Moyane. (Photo by Gallo Images / Sunday Times / Masi Losi)

PRETORIA, SOUTH AFRICA  JUNE 29: Suspended SARS Commissioner Tom Moyane is flanked by his legal team, advocate Dali Mpofu and Eric Mabuza during a break in the proceedings of the Nugent commission of inquiry on tax government and administration on June 29, 2018 in Pretoria, South Africa. Moyanes lawyer, advocate Dali Mpofu said an inquiry into the operation of the agency should be halted pending a disciplinary hearing against his client Moyane. (Photo by Gallo Images / Sunday Times / Masi Losi)

There were snide comments and accusations floating thick in the air at the Commission of Inquiry into State Capture on Monday 30 November. However sanitized the podium was, the tension was still palpable among the legal trash talk.

What started off cordial enough, with Gordhan attending via video stream, later descended into raised voices at best, passive-aggressive remarks, and allegations of racism at the most awkward of times. The end result is that after five hours of cross-examination, Mpofu needs more time.

Another date will be set for a continuation.

It’s been a fraught old day at the State Capture Inquiry. Within minutes of being told to ‘chill’ by an opposing lawyer, Pravin Gordhan was prevented from giving evidence about Jacob Zuma, due to an intervention by Raymond Zondo. He was then put on the spot for allegedly making a racist remark against Tom Moyane – but the jury remains out on that one.

Msholozi is certainly not in the good books of his ‘friend’ since he ran away from the Commission 10 days ago. However, Zondo’s move was not to save his skin – the DCJ had to act fast to preserve the integrity of his wide-ranging investigation.

Gauteng Education MEC Panyaza Lesufi has confirmed that several investigations will be launched into the multiple leaks of matric papers during this exam season. He stated that the Life Sciences examination – which took place on Monday – was also compromised before students arrived for their tests earlier today.

This would complete an extremely embarrassing hat-trick for the Education Department, who have already seen significant Maths and Physical Science leaks undermine the credibility of this year’s matric evaluations. In a year that posed the most difficult challenges, students are now confronting an entirely different threat.

Speaking at a media conference, Lesufi stated that the matter would soon be turned over to the Hawks, who would probe the infiltration of these matric papers in due course. He defended the administrative teams behind this year’s examination schedule and vowed that the ‘integrity of the assessments’ would not be compromised.

A pissed-up police officer has gone viral for all the wrong reasons this weekend, as a video of his ‘unbecoming conduct’ spread like wildfire Sunday. The North West based SAPS Constable is facing several criminal charges after he was caught on camera in a drunken stupor – all while behind the wheel of a state vehicle.

In the video, a drunk Constable in full uniform is seen struggling to stand steady on his feet to inspect the state motor vehicle and check what appears to be a scratch. The damage was apparently caused by the collision of the state vehicle with a fence. His incoherent speech and general lack of awareness compounded the shock amongst gathered locals.

The Constable was released on R500 bail and is expected to appear in the Wolmaransstad Magistrates’ Court on Monday, 30 November 2020, facing charges of driving under the influence of alcohol, reckless and/or negligent driving, and use of a motor vehicle without owner’s consent. We doubt the officer in question has had many hangovers worse than this one…

A female employee at the City of Tshwane has filed a complaint of sexual harassment against her boss. The City has since responded but very briefly.

According to Pretoria News, the victim said she had been subjected to an act by the accused that reduced her dignity and what she stood for as a married woman, mother and colleague. In her complaint to the City, which only the publication has seen, she alleged that her boss said “hey beautiful, look how sexy you are” during a marathon last year.

The woman claimed it did not stop there as the inappropriate comments continued. She said she could no longer “take the torture at her place of work” and went on to say that she did not feel safe to be in the same room as her boss or the Head of Department.

COVID-19 CASES IN THE WESTERN CAPE

Western Cape Premier Alan Winde remains very open about the prospect of wheeling back the province’s lockdown measures, as cases continue to surge in several hot-spots. Both the Garden Route and the Cape Town Metro regions are under severe scrutiny, as local outbreaks sent the COVID-19 infection rates soaring.

The neighbouring Eastern Cape is already staring down the barrel of reintroduced restrictions, with some speculating that a version of ‘Level 3 lockdown’ could return to the province. Last week, Zweli Mkhize hinted that changes were afoot – and it seems the Western Cape is heading in a similar direction.

Local hot-spots – or clusters – are driving up national numbers. With a hectic travel period due in December, the chances of the virus spreading climb sharply. South Africa could be hit by a second wave of COVID-19 if we’re not careful, and it looks like those in the south-west are already on course for some vital interventions:

Mamelodi Sundowns coach Manqoba Mngqithi has confirmed that the club will dedicate their next 16 games to late defender Anele Ngcongca.

The Cape Town-born right-back died last week after he was involved in a motor vehicle accident in KwaZulu-Natal, where he was due to join AmaZulu on loan.

The LA Giltinis have signed South African-born twins JP and Ruan Smith ahead of the 2021 Major League Rugby season.

According to the RugbyPass website, the Smiths grew up in South Africa before relocating to Australia where they completed their schooling.

The 30-year-olds represented the Reds in this year’s Super Rugby and Super Rugby AU tournaments.

Mosimane steered Al Ahly to their a record-extending ninth title with Magdy Afsha’s 88th-minute strike securing the 2-1 victory in was dubbed the ‘Derby of the Century’ against bitter rivals Zamalek.

Amr El Suluya had given Al Ahly, the Egyptian Premier League champions, a sixth-minute lead before Zamalek’s Shikabala’s strike in the 31st minute set up the thrilling second half.