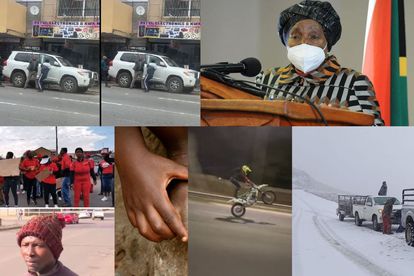 We’ve got all the latest news stories and headlines in South Africa you really need to know on Thursday 21 July.

We have a variety of news for you!

John Wick, is that you? A civilian in Klerksdorp managed to scare away three attackers after they picked the wrong man to mess with.

A video of a Gauteng daredevil has gone viral for his stunts on the N12, East Rand recently. He is seen wheeling his off-road bike at night.

And this is horrible! An Ermelo farmer allegedly RAN OVER two children and ASSAULTED another. The children are aged 10, 11, and 13 respectively.

Meanwhile, Nkosazana Dlamini-Zuma has confirmed that the latest State of Disaster extension will be in place ‘well into August’.

Something to look forward to – The South African Weather Service said MORE light snowfall is expected this WEEKEND in parts of SA. Here is more information on the affected areas.

An unassuming Klerksdorp man has gone viral on Wednesday after he stood his ground against three potential assailants in North West. Various clips have emerged online, showing how the middle-aged civilian managed to fend off the thugs who had targeted him.

The footage is scarcely-believable. Not only because of this incredible act of defiance, but for the fact that these crooks felt so emboldened to carry out an offence in broad daylight. Even when they back away from their would-be victim, the trio simply walks away unbothered.

What in the world! An Ermelo farmer who allegedly RAN OVER two children with his car and ASSAULTED another, will appear in court soon.

According to police spokesperson Colonel Donald Mdhluli, the 41-year-old farmer, Louis Johannes Grobler, is facing two counts of attempted murder as well as an assault with intent to cause grievous bodily harm.

News that Nkosazana Dlamini-Zuma is extending the State of Disaster may give some South Africans flashbacks to the dark times of hard lockdown – however, this continuation of an emergency framework has nothing to do with the COVID-19 pandemic.

It has been three months since a national State of Disaster was declared for KZN, after it was annihilated by devastating floods. Homes were washed away, and gushing torrents claimed scores of innocent lives. The ANC Cabinet reacted swiftly to the tragedy.

WATCH: Gauteng daredevil goes viral for his stunts on N12

A Gauteng daredevil has recently gained instant fame with these stunts on the N12 in the East Rand.

The biker is seen on his offroad scrambler with no headlights or numberplates on the N12 at night while standing performing dangerous stunts.

In the video, he is seen wheeling his bike and keeping it in the air for eight seconds and while this is impressive it is definitely not something we want to see on a busy highway.

Just in! MORE light snowfall is expected in parts of SA this WEEKEND

MORE light snowfall is expected in parts of South Africa this coming WEEKEND.

The South African Weather Service (SAWS) warned there is a 30% chance of light snowfall expected in the high-lying mountains in the following areas:

The SAWS furthermore advised the public to keep their livestock in shelters and avoid traveling on icy roads.