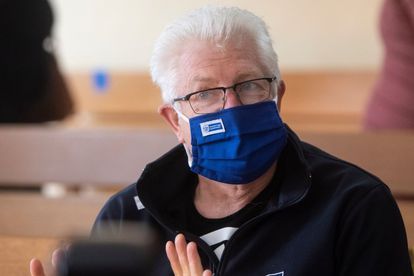 MITCHELL’S PLAIN, SOUTH AFRICA – JULY 31: Western Cape Premier Alan Winde wait in the queue to receive the COVID-19 vaccine at Mitchell’s Palin CHC on July 31, 2021 in Mitchell’s Plain, South Africa. It is reported that the site was chosen due to vaccine hesitancy in the area. (Photo by Gallo Images/Brenton Geach)

MITCHELL’S PLAIN, SOUTH AFRICA – JULY 31: Western Cape Premier Alan Winde wait in the queue to receive the COVID-19 vaccine at Mitchell’s Palin CHC on July 31, 2021 in Mitchell’s Plain, South Africa. It is reported that the site was chosen due to vaccine hesitancy in the area. (Photo by Gallo Images/Brenton Geach)

Are you keeping up with the latest news stories and headlines in South Africa? We’ve got the news you really need to know on Thursday 19 August 2021.

Can we expect another family meeting soon? If it were up to the Western Cape, South Africa would move to lockdown Level 2 in light of the fact that the province has moved past its peak of infections. Western Cape Premier Alan Winde says he will be petitioning President Cyril Ramaphosa to lift the current Level 3 regulations and move the country to Level 2 immediately.

The Western Cape is officially past its third wave peak, Premier Alan Winde announced on Wednesday 1 September. As a new season of Spring kicks off, he is also hoping for a new alert level – as in, a swift downgrade from Level 3 lockdown to Level 2.

Winde believes that passing the peak means we should focus on the dreaded unemployment crisis and boost livelihoods, not only lives.

Winde, in a statement, said that according to their data, new COVID-19 cases, hospitalisations and deaths are now showing consistent declines, pointing to the Western Cape having exited its third wave peak.

“This trend is confirmed by the South African COVID-19 Modelling Consortium, which now indicates a 99% probability that the Western Cape has already passed the peak of the third wave,” he said.

The Special Investigating Unit (SIU) together with Transnet SOC Ltd has welcome the judgment handed down by Judge Lebogang Modiba at the Special Tribunal instructing former Transnet employee Herbert Msagala to pay back the sum of R26,4 million to Transnet.

The ruling was handed down in the special tribunal on Tuesday 31 August.

“The SIU and Transnet instituted civil matters in the Special Tribunal in July 2020 to order that Mr. Msagala pay the money he received from a tender with IGS Consulting between 2015 and 2016,” he said.

According to IOL, special tribunal Judge  Lebogang Modiba found that Msagala had acquired 36 cars between February 2016 and January 2017. These were owned by the Msagala family trust.

The South African Health Products Regulatory Authority (SAHPRA) has said there is no evidence of the COVID-19 vaccines being linked to any deaths.

The health regulator appeared before Parliament’s Portfolio Committee on Health on Wednesday, 1 September 2021.

“What we mean is that the deaths are not related to being vaccinated, in 98% of those cases they were elderly people that received vaccinations early on. Again, we did detailed assessments, age, comorbidities and any medication that they are on,” said SAHPRA CEO Tumi Semete.

According to SAHPRA, 32 deaths were looked into – 30 of them were found to be coincidental, while there isn’t enough information on the remaining two fatalities.

Koeberg: Eskom confirms reactor ‘tripped’ but will be up soon

Eskom has confirmed that the Koeberg Unit 1 Reactor tripped on Monday, 30 August 2021, due to a fault on the electrical breaker to one of the primary coolant pumps.

Eskom said in a statement on Wednesday evening that the reactor had tripped at around 4.30pm and that it was then safely shut down by the operators, in compliance with the operating procedure.

“Initial fault-finding ruled out any concerns on the primary pump or the motor itself. There are no nuclear safety concerns,” Eskom said.

Eskom said that by mid-morning on Tuesday the cause of the trip had been confirmed to be a faulty electrical protection relay, which had tripped the primary motor.

“The secondary side was already fully conditioned and on standby, waiting for the reactor and the primary system to be returned to service. Only once an assessment of the protection relay is complete, together with the analysis of the trip, the unit will be returned to service,” Eskom said.

Eskom said that the Koeberg unit shutdown and response had been “straight forward, and no safeguard systems were required to operate”. “The National Nuclear Regulator (NNR) does not need to approve the restart, although the regulator is kept informed of the situation, the findings and the actions being taken,” Eskom said.

Bathtub of horrors: Husband appears in court for murder of ‘missing wife’

Just a few days ago, the body of a woman was found inside her Butterworth home underneath the bathtub. Yes, you read that right. The woman’s husband, who reported her missing two years ago, appeared in the Butterworth Magistrate’s Court on Wednesday 1 September 2021 for her murder.

The husband, who can now be named since his court appearance, is known as 43-year-old Yibanathi MacGyver Ndema. According to the National Prosecuting Authority (NPA), he is facing two counts; one of premeditated murder and that of defeating the ends of justice.

“It is alleged that Ndema killed his wife, Noluvuyo Nonkwelo, 36, at their marital home at Zingqayi area in the district of Butterworth on 1 July 2019. On 3 July 2019, he reported his wife as a missing person to the police, even though he knew that was not true,” said Luxolo Tyali, NPA Regional Spokesperson.

As previously reported by The South African, police were alerted by a family member who was suspicious about the family bathtub which was no longer mounted on the surface.

The judge said Werking’s parents – Beth and Paul Werking – had no right to get rid of his collection of films, magazines, sex toys and other items. The act supposedly took place while Werking lived at his parents’ home in Grand Haven, Michigan, for 10 months following a divorce.

He later moved to Muncie, Indiana and learned that his collection was missing. “Frankly, David, I did you a big favour getting rid of all this stuff,” said Paul in an email to his son, according to AP.