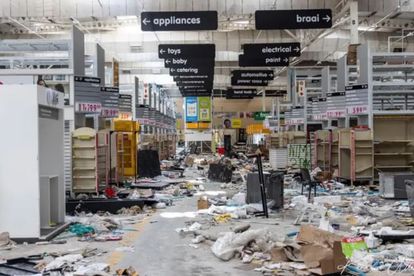 We’ve got all the latest news stories and headlines in South Africa you really need to know on Thursday 13 January.

According to the Global Risks Report for 2022, the forecast for South Africa is grim.

In the past six months, South Africa has experienced deadly riots, attacks on its national key points, and of course, an alleged act of arson at Parliament. State collapse, therefore, is firmly in the picture unless SA pulls itself together.

In other news, Transport Minister Fikile Mbalula blamed the heavy backlog in issuing new driver’s licenses on a broken machine, which is currently in Germany for repairs. It is the only such machine in the country.

Need something to brighten your mood? This weekend, Passion Java drove the internet WILD after paying R1.3 million for a jaw-dropping bar bill in Pretoria. Now, just days after his flashy exploits, the entrepreneur says he’s on his way to meet Cyril Ramaphosa.

South Africa ‘at risk of STATE COLLAPSE’ – according to top experts

Well, isn’t this a shocker? The World Economic Forum (WEF) has published its Global Risks Report for 2022, assessing the biggest threats to over 100 countries – and the forecast for South Africa is grim.

The number crunchers at the WEF have identified five major risks for each nation featured in the index. Economic, environmental, and geopolitical factors are all considered by the researchers, and amongst the challenges facing Mzansi in the years ahead, a total state collapse has flown to the top of the list.

The term, which refers to the rule of law completely failing and governments dissolving as a result of political upheaval, is one that causes great anxiety – and the WEF aren’t using it lightly.

In the past six months, South Africa has experienced deadly riots, attacks on its national key points, and of course, an alleged act of arson at Parliament. State collapse, therefore, is firmly in the picture unless SA pulls itself together.

Click here to read more about this grim forecast.

Transport Minister Fikile Mbalula blamed the heavy backlog in the issuing of new driver’s licenses on a broken machine, which is currently in Germany for repairs. It is the only such machine in the country.

According to eNCA, Mbalula confirmed that the driver’s license printer is in Germany, on Tuesday, 11 January. However, he added that those waiting for their road pass would be presented with interim solutions soon.

“The license machine is in Germany, it has broken. I am going to be announcing temporary measures with regards to temporary license but I am moving ahead with the new driver’s license cards which I will announce in public,” said Mbalula.

Automotive Association of South Africa (AA) spokesperson Layton Beard told Newzroom Afrika that the reason that South Africa only has one driver’s license printer is most likely to limit corruption. The single machine means that fraudulent licenses are less likely to make their way into the public through the Department of Transport and Driver’s License Testing Stations (DLTC).

“I think you don’t want to have a situation where the printing of licence cards is farmed out to the DLTCs. You may find yourself in a worse position in terms of illegal driving licence cards that are in circulation,” said Beard.

The current backlog is believed to be over 383 000 driver’s licenses after the machine broke down in November. All the more reason, said Beard, for the country to have at least one backup machine. The repair was expected to be completed at the end of December 2021 but Mbalula said the machine should be back in the country by March.

Passion Java drove the internet WILD this weekend, after he forked out R1.3 million for jaw-dropping bar bill in Pretoria. Now, just days after his flashy exploits, the entrepreneur says he’s on his way to meet Cyril Ramaphosa.

Even by his own ostentatious standards, breaking social media AND meeting the President of South Africa constitutes a madcap few days for the businessman-come-preacher. Passion Java is a self-styled prophet, hailing from Zimbabwe – and he’s now hoping to use his vast fortune in a more productive manner.

According to Passion Java’s latest Facebook post, he is currently en route to discuss ‘youth entrepreneurship’ opportunities with President Ramaphosa. He wants to use his wealth to help empower young Tanzanians and Zimbabweans too, and his main goal is to encourage Africans to develop their own businesses.

“On my way to meet His Excellency President Cyril Ramaphosa in South Africa to discuss possible opportunities for me to engage South African youths for entrepreneurship support. Also in 2022 I will empower and bless Tanzanians and Zimbabweans with money and advice to start a business. Africa, are you ready?”

“Did a lot of travelling last year and I was so inspired by the entrepreneurship spirit all over Africa. I just bought a new jet so that I can be in different places much quicker.”Passion Java.

The silly season might be over but it appears that this hasn’t signalled the end of horrific accidents in South Africa. An incident in Limpopo has seen 12 people killed and eight injured.

A 22 seater bus had been travelling on the N1 near Mookgophong in the province when it collided head-on with an SUV. The victims were mostly bus passengers. Eleven of the bus occupants had been trapped and burnt beyond recognition. The driver of the SUV suffered the same fate.

The eight injured passengers have been taken to hospital with reports indicating that the accident had taken place shortly before sunset on Wednesday.

An eye-witness who was amongst the first to arrive at the scene described it as nothing less than chaotic. The witness says that passengers trapped in the wreck could be heard screaming for help.

Passing motorists who stopped to assist the victims of the accident were only able to rescue eight people.The witness, who opted to remain anonymous, confirmed to reporters that eight occupants had been rescued from the bus.

Click here to read more about this horrible accident.

The KwaZulu Natal storms and severe weather conditions have been awfully fatal. The province’s government has revealed that 24 innocent lives were lost since the disaster began mid-December.

So what exactly occurred and how? According to the Cooperative Governance and Traditional Affairs (Cogta) MEC Sipho Hlomuka, the appalling deaths started when the thunderstorms hit on 15 December 2021.

The MEC said 18 people died from drownings, while six others were killed by violent lightning.

“The latest report on the incidents that have taken place in the province since December last year shows that 24 lives have been lost – 18 drownings and six in lightning strikes – as a result of weather-related incidents, with one person missing,” Hlomuka said as quoted by News24.

Click here to read more about these tragic deaths.